Amnesty International to Send Observers to US Presidential Conventions

Amnesty International USA announced on Thursday that it will send a delegation of observers to the Republican and Democratic presidential nominating conventions. 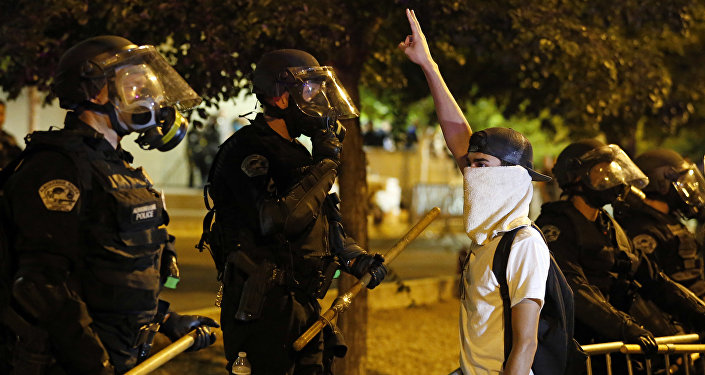 © AP Photo / Brennan Linsley
Cleveland Takes Precautions Ahead of Republican National Convention
WASHINGTON (Sputnik) — The international human rights advocacy group Amnesty International USA announced in a press release on Thursday that it will send a delegation of observers to the Republican and Democratic presidential nominating conventions.

"Citing concerns about human rights violations at protests in the United States over the last couple of years, Amnesty International USA (AIUSA) will deploy teams of human rights observers to both the Republican National Convention in Cleveland, and the Democratic National Convention in Philadelphia, to monitor any protests and law enforcement response," the release said.

The group’s Strategic Communications Executive Director Eric Ferrero noted they are "deeply concerned that people’s fundamental human right to peacefully assemble and protest may be violated during the conventions in Cleveland and Philadelphia."

Amnesty International delivered a letter to the Cleveland and Philadelphia police departments with a list of expectations regarding avoiding excessive use of force against protestors, and ensuring the rights of peaceful assembly and media coverage.

The decision marks the first time in Amnesty International’s 55-year history that the organization has sent teams of observers to monitor a US presidential nominating convention.

In recent weeks, cities across the United States have seen heightened tensions and protests following a number of police killings of unarmed Americans.

Both Cleveland and Philadelphia are each preparing for upwards of 50,000 convention attendees as well as thousands of protesters expected to demonstrate outside the events.