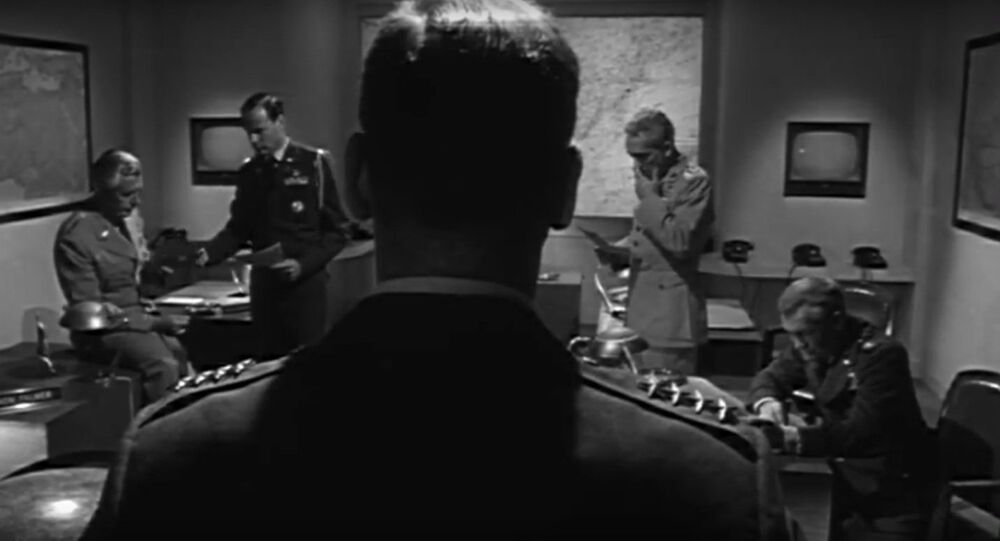 Unnerved over the idea of a Trump presidency, wealthy members of the GOP inner circle are desperately looking for a new candidate for the job, and one name has come up again and again – retired United States Marine Corps General James Mattis. Mattis, Neocon pundits openly write, may be the ideal "dark horse candidate" to save their new world order.

Over the last few months, James Mattis, a distinguished retired marine commander who last served as the head of US Central Command, has been repeatedly mentioned by neoconservative strategists and pundits as a possible antidote to Donald Trump, Ted Cruz and even Hillary Clinton.

Known as 'the Warrior Monk' for his devotion to the military, the 65-year-old officer holds tremendous respect among the military, and has been called 'the most revered Marine general' in a generation by the Military Times.

© AP Photo / Matt Dunham
Gen. James Mattis, the head of U.S. Central Command, takes questions after delivering a lecture to the London think tank Policy Exchange in London, Tuesday, Feb. 1, 2011.
© AP Photo / Carolyn Kaster
How the American Neoconservatives Destroyed Mankind’s Hopes for Peace
Last week, a story in The Daily Beast revealed that a group of anonymous billionaire donors have decided to put their money where neocon strategists' mouths are, assembling a team of high profile experts to study the possible popular reaction to a Mattis ticket, either as a Republican dark horse candidate in a contested convention, or a third party candidate in the general election in November.

The group, The Daily Beast noted, has already sent the retired general half a dozen strategy memos on how he might win.

The precedent exists, pundits say. In 1952, General Dwight D. Eisenhower was convinced to join the Republican primary race late in the game, ultimately defeating Robert Taft to secure the nomination and going on to win the presidency.

The only difference is that Eisenhower actually ran in the primary campaign, collecting states and delegates before defeating Taft at the convention. This time, Mattis would only make it onto the Republican ticket if Trump fell short of the 1,237 delegates necessary to clinch the nomination.

It would be interesting to see how the Republican establishment, already in a tough spot after being bashed by Trump for 'stealing' the Colorado primary in a 'voteless victory', would attempt to explain to Republican voters why the party even holds primaries, if the votes might go to a candidate who didn't even run.

So far, the suspiciously undemocratic air hanging over the whole proposal, which reads like a modern-day, real life version of John Frankenheimer's classic Seven Days in May, has not stopped neocon pundits from fawning over the dark horse candidate, and presenting him as a realistic alternative to the current batch of candidates.

​Most recently, in a piece for the news and analysis website The Federalist, Hudson Institute fellow Rebeccah Heinrichs explained that Mattis, a military man of "moral clarity" who "understands and loves America," would bring America to victory over its many enemies.

Indeed, the concept of Trump's 'America First' foreign policy, which isn't as interventionist as neoconservative hawks might like, is something the campaign to draft Mattis takes very seriously.

Speaking to the Military Times, John Noonan, a former Jeb Bush aid now involved in the Mattis effort, said that he has high hopes that Mr. Trump's foreign policy proposals may be the straw that broke the camel's back in getting Mattis to agree to a run.

"I do think this race is serious enough, and Donald Trump's foreign policy is worrisome enough, to make him consider it," he said.

© Sputnik
President Killary: Would the World Survive President Hillary?
Moreover, not at all shy about admitting the undemocratic overtones of the effort, the Republican strategist emphasized that in this election, "all bets are off" as far as the actual candidates go, and "we shouldn't be embarrassed to allow the American people a good choice for president."

Noonan emphasized, speaking to The Daily Beast, that General Mattis would be a perfect alternative to both Donald Trump, who he characterized as a "fascist lunatic," and to Clinton, who "has one foot in a jail cell." He would "be the first in line to plead with the general to come save America," he says.

And if Trump succeeds in getting the Republican nomination, Mattis' strategists have a Plan B. This, they say, consists of running the general as a third party candidate, and preventing either the Republicans or the Democrats from securing the 270 electoral votes necessary to win the presidential election outright.

In case of a split, the strategists calculate, the incoming Congress could turn to the 12th Amendment of the US Constitution, giving them the authority to install the candidate of their choice. The rule was last used in 1824. Ultimately, they estimate, with neither Trump nor the Democratic candidate able to find the necessary Congressional support, Mattis could be presented as an ideal consensus candidate.

For now, the retired general, who currently works as a senior fellow at the Hoover Institution, a conservative think tank, has declined offers to run, dismissing it all as "idle talk" in a March interview for The Daily Caller. However, with neocon passions flaring over fears of a Trump presidency, the powerful group may yet conscript the general to save their new world order between now and November.