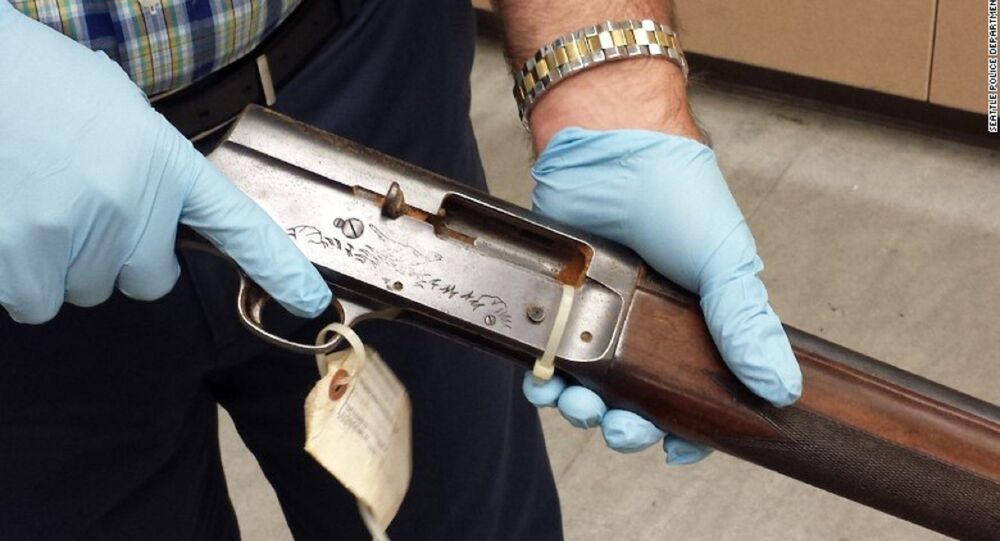 After two decades, Seattle police have released photos of the gun that Nirvana frontman Kurt Cobain used to end his life.

A series of five photos show Seattle police cold-case Detective Mike Ciesynski holding the Remington 20-gauge shotgun at a variety of angles. The photos, taken in 2015, were released in response to a public records act request by CBS News. CBS sought the photos to "dispel a rumor … that the shotgun had been melted down to hide evidence in a supposed … cover-up of a potential murder.”

Cobain’s death, and the determination that it was suicide, has long been a subject of scrutiny by many who suspect foul play.

© AP Photo / Joel Ryan
Killing Punk Dead: Style Scion to Burn $7 Million in Punk Memorabilia
The grunge pioneer died at the age of 27 on April 5, 1994, in his Seattle home that he shared with his wife Courtney Love, and their daughter Francis Bean.

In 2014, on the 20th anniversary of Cobain’s death, Seattle police released crime-scene photos of his personal belongings, including his driver's license, syringes, cigarettes, a lighter and various other items.

Richard Lee, who runs a local public access TV show, is currently suing the city and the police department to release photos of Cobain’s body at the scene, which he believes will prove that the beloved singer was murdered.

Love and Frances Bean have fought the release of the photos, claiming that the pictures "would encourage more disturbed stalkers and fanatical threats."

"I have had to cope with many personal issues because of my father's death. Coping with even the possibility that those photographs could be made public is very difficult," Frances Bean Cobain wrote in the court documents. "Further sensationalizing it through the release of these pictures would cause us indescribable pain."

She also wrote of a crazed fan who broke into her home and hid for three days because he "believed my father's soul had entered my body.”

Love has the suicide note, and has kept it out of the public eye, but says that neither she nor her daughter have seen photos from the death scene.

Seattle Police to Train Avoiding Excessive Use of Force