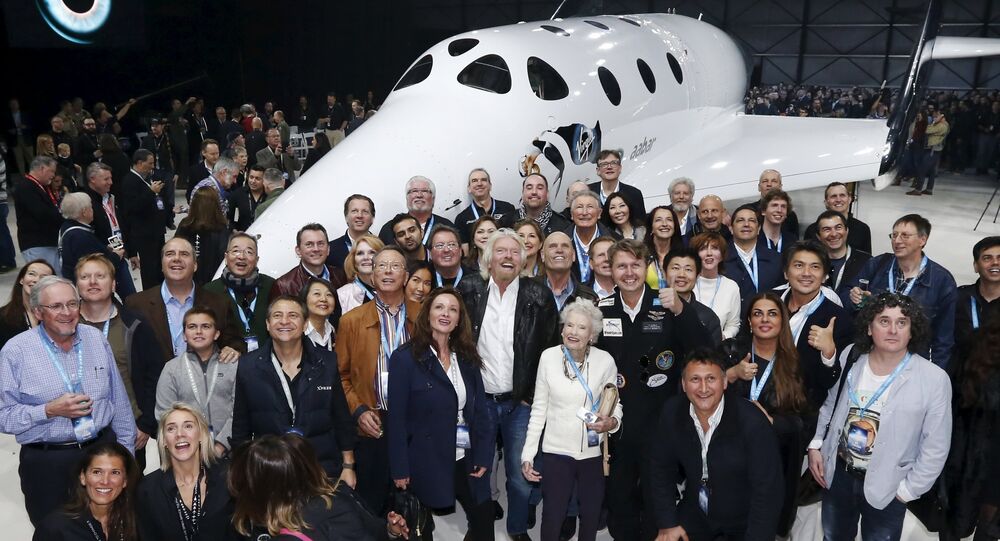 © Flickr / Charly W. Karl
A New Era for Understanding Space: Gravitational Waves Explained
Virgin Galactic unveiled its newest spacecraft, SpaceShipTwo, on Friday, which is designed to take space tourists beyond the Earth's atmosphere for $250,000 per trip.

The new spacecraft was unveiled by Virgin boss Sir Richard Branson, and the grand opening at the Mojave Air and Space Port in California was attended by the future astronauts who will pilot the tourists to their extraterrestrial destination.

"I would be very proud to fly on this spaceship," said Professor Stephen Hawking, who named the spacecraft 'Unity,' and whose recorded speech was played at the unveiling.

The new SpaceShipTwo is designed to take a crew of two pilots and up to six passengers to space, the largest total flight crew since NASA’s eight member STS-61-A mission in the Challenger spaceship in 1985.

​SpaceShipTwo is powered by a hybrid rocket motor, which combines elements of solid rockets and liquid rocket engines by using a solid fuel source and a liquid oxidizer. The company plans to ferry the spacecraft to an altitude of 50,000 feet (15,240 km) using a four-engine, dual-fuselage carrier aircraft called 'WhiteKnightTwo' before launching it into space.

SpaceShipOne was a three-seat spaceplane developed by a US aerospace company Scaled Composites that completed three flights into space in 2004. It was launched from the White Knight carrier aircraft and then ascended just beyond the atmosphere, arced through space and returned to Earth after 24 minutes, and three minutes of weightlessness.

© Sputnik / Maksim Blinov
Tourists Could Soon Benefit From Direct Flights to Baikonur Space Center
The spaceflight system won several awards for the aeronautical achievement, and an agreement with Virgin Galactic to develop a commercial version of the system.

However, tragedy struck the commercial spaceflight project in October 2014, when the original successor to SpaceShipOne, a SpaceShipTwo spacecraft called 'Enterprise', was destroyed in an accident during its 55th test flight over the Mojave Desert in California.