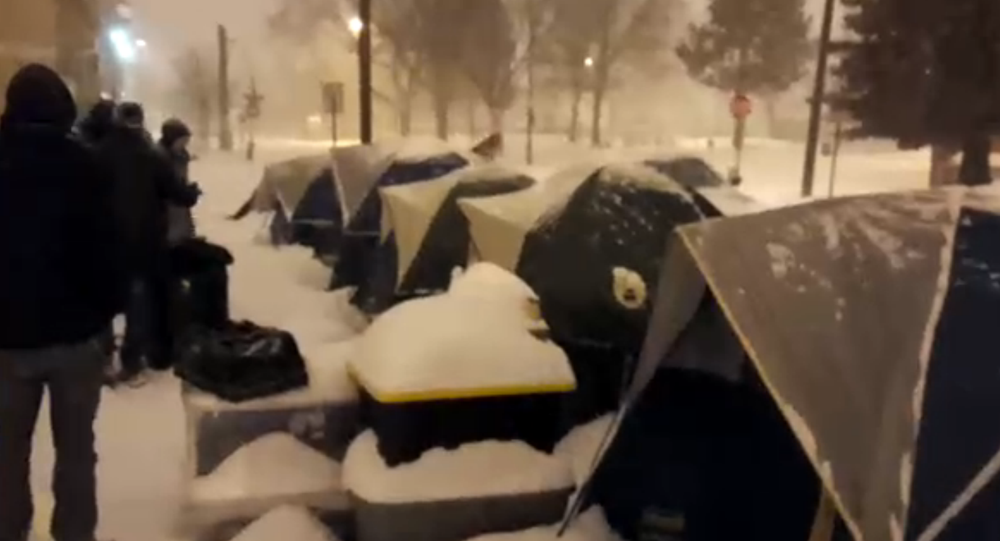 On Tuesday morning, during a snowstorm, Denver police raided a homeless encampment and ordered them to take down the tents they had set up to protect themselves from dangerous weather.

Police arrived at the temporary tent city around 6AM, amid high winds and 19 degree weather, as the residents of a small homeless community calling itself Resurrection Village, slept and kept dry.

Independent media outlet Unicorn Riot was on the scene and livestreamed the dispersal, as officers forced homeless people into below-freezing weather.

​Representatives from Unicorn Riot reported that police suggested that they would have left the people alone if Resurrection Village was placed somewhere unseen.

A homeless community member responded to the officer by stating, “If you’re trying to change something, you don’t go and hide, you bring it to the forefront.”

An organization called Denver Homeless Outloud wrote on their website about the tent city, prior to the arrival of the police.

“Tonight, despite the Urban Camping Ban, we set up tents on this land because it is snowing and we who are houseless must stay warm and dry somehow. Meanwhile, all over the city there is public land–land on which in many cases there used to be affordable housing–land which now sits vacant or is being sold to private developers. We have a responsibility to use this public land to meet the public need!” DHO wrote on their website.

According to a survey conducted in January 2015, there were at least 6,130 homeless people in the seven county metropolitan Denver area.

Of those counted, 37% were women and 49% were families with children.