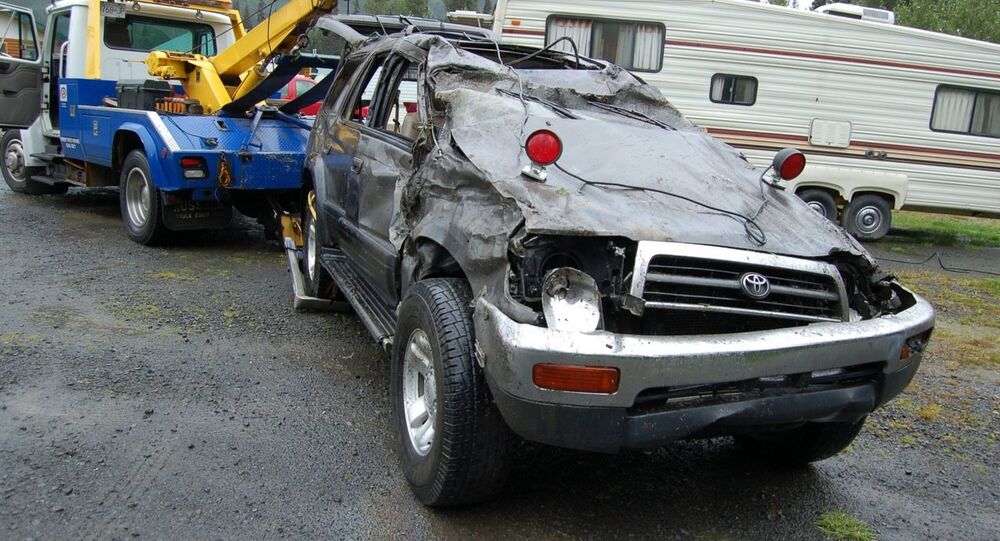 Baby in Car Accident Brought Back to Life... Twice

A retired Highway Patrol Officer breathed life into an infant for a second time after an accident took the child's life.

Mike Spicer was listening to a sermon about people possessed by the Holy Spirit when he was driving his truck on Highway 198 in Visalia. He didn’t know he was about to bring a baby back to life.

© Photo : Youtube/RT
Policemen Give Mouth-to-Mouth to Dog Saved From Mudslide
The sermon was still playing when he made light compressions on the chest of Ryder Lockwood, who was dead. Seconds later, the baby began to cry.

Spicer, a retired California Highway Patrol Officer, stopped his truck when he noticed an overturned vehicle that had struck a tree. He approached the wreck and was handed Ryder by Tony Calvillo, who first attempted to save Ryder’s life.

Calvillo, a volunteer pilot for the Tulare County Sheriff’s Office Search and Rescue Team, saw the vehicle veer off the highway with a mother and her three children inside. He called 911 and approached the scene. He then helped 5-year-old Preston crawl out of the wreck before using a hunting knife he had purchased earlier that day to shatter a window and pull Ryder out of the back seat.

He gently laid Ryder on the ground and made light compressions on his chest for about 30 seconds before Ryder took a breath. He handed Ryder to Spicer who had just arrived and went back to the wreck to help those still inside.

© Flickr / Tony Webster
Ohio Cop Who Killed Man With Cruiser Refused to Perform CPR, Checked on His Car Instead
Ryder then died again.

An unidentified man in his 20s also arrived and helped Calvillo pull out Ms. Lockwood and 2-year-old Aubreanna.

They walked back up the highway to find Spicer performing CPR on Ryder as the baby lied on the seat of Spicer’s truck. Lockwood asked if her baby was dead. Before Spicer could utter a word, Ryder took another breath.

“We had the chills come up our spines,” Cavillo told the Miami Herald. “I don’t know how to explain it, but I’m telling you. There was a higher power involved here.”

Ryder was smiling and laughing before he arrived at the hospital where doctors said he was healthy and suffered no complications from the crash.

Policemen Give Mouth-to-Mouth to Dog Saved From Mudslide