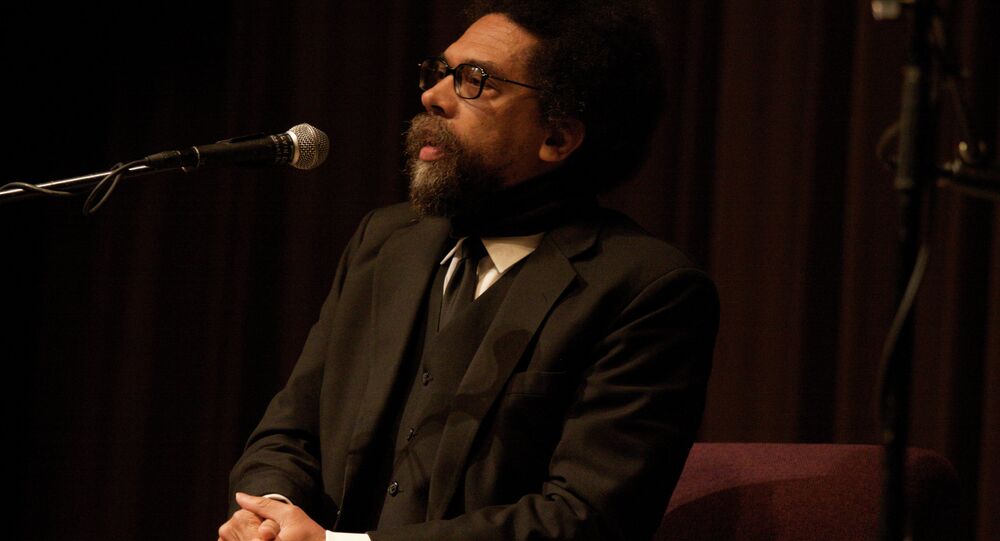 Famed US scholar, activist and author Cornel West has just wrapped up a three-day tour stumping for Vermont Senator Bernie Sanders’ presidential campaign in Iowa. As he told Sputnik following Saturday evening’s Democratic debate, “There was some truth-telling right there!”

As West climbed on to the back of a pick-up truck to address the hundreds of people feeling the Bern, demonstrators unraveled a huge banner in front of him asking, “Will you feel the Bern for Palestine?”

West warmly welcomed the statement, responding, “Brother Bernie Sanders, he realizes that a precious Palestinian baby has the same value as a precious Israeli baby,” and hugged the protesters, who seemed content with the response and took a seat to listen to what he had to say.

Unlike Sanders, West did not hold back on calling Hillary Clinton out for what many criticize as flip-flopping on issues like gay marriage and the Trans-Pacific Partnership, calling the former secretary of state an opportunist who changes her mind with the polls.

“Then I hear sister Hillary and the others talking about… now I want to be pragmatic. No, one of the founders of American pragmatism, John Dewey, was a democratic socialist! Don’t confuse opportunism with pragmatism.”

“Neoliberal politicians are too opportunistic, and they’re involved in ‘evolving.’ I can’t believe in same sex marriage today, but I evolved and I changed my mind — no you checked the polls, that’s what you did!” West stated.

The well-established intellectual was all love for Sanders, however, singing his praises in the highest form.

“There was some truth-telling right there,” West effused.