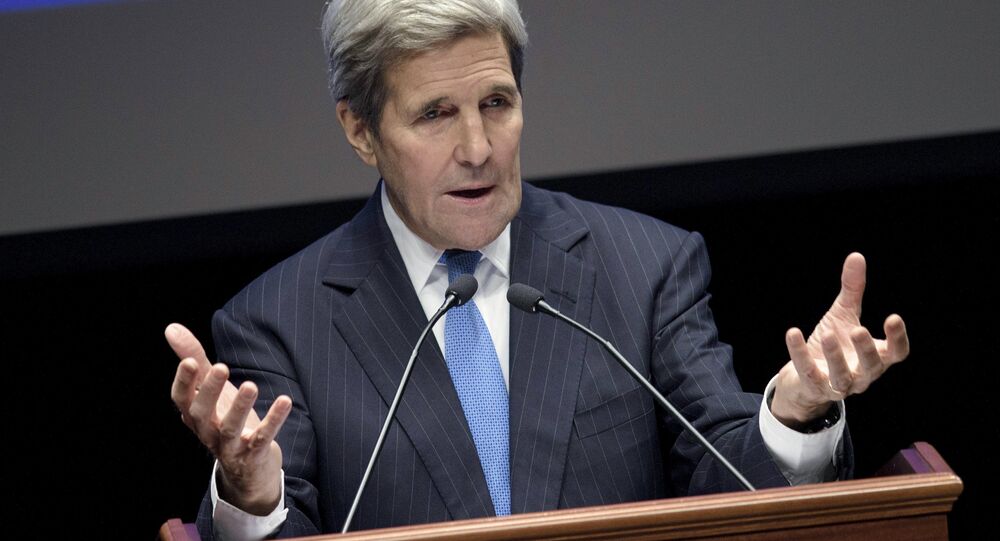 Speaking at the US Institute of Peace in Washington, DC, US Secretary of State John Kerry discussed Washington’s foreign policy in Syria.

"The stakes could not be higher," Kerry said on Thursday, before insisting that the United States is "on the right track and we are making gains and we are clear on the road ahead."

© REUTERS / Brendan Smialowski
Should We Set High Hopes on the Upcoming Syrian Talks in Vienna?

The secretary of state also reiterated the Obama administration's three principle goals for ending the conflict. The first is the necessity for defeating the self-proclaimed Islamic State terrorist group, the second is the intensification of diplomatic efforts, and the third being a determination to support regional allies to ensure that Syria's instability does not spread beyond its borders.

Kerry also spent a good deal of time claiming that the Syrian government was ultimately responsible for the creation of IS. While the international community largely agrees that the principle cause for the terrorist group's formation was the instability created by the US-led invasion of Iraq, Kerry blamed local dissatisfaction with the leadership of Syrian President Bashar al-Assad.

He also stressed Washington's belief that Assad must be removed from power to ensure stability.

"Without a real transition, the fighting will continue and the war will never end," Kerry said. "If the war is to end, we must find an alternative [to Assad]."

During a press briefing Thursday morning, State Department spokesperson Mark Toner indicated that Kerry’s address would lay out the various efforts that the White House is pursuing to "bring a political resolution to the conflict."

"The focus of this speech is to lay out in a public way…what our strategy is going forward and how we’re working with the various stakeholders, what the next steps are," Toner said.

The Obama administration has faced criticism for its lack of a coherent strategy in the Syria conflict, especially after the failure of its plan to train-and-equip so-called “moderate” Syrian rebels.

The address came ahead of diplomatic talks to be held in Vienna. Concerning the Syria conflict, the summit follows similar talks held last month, from which representatives of the Syrian government were noticeably absent.

Kerry’s speech also followed the Obama administration recent announcement of a new plan to place as many as 50 US Special Forces "advisers" on the ground in the Syria, reversing a long-time pledge not to place any additional "boots on the ground" in the Middle East.