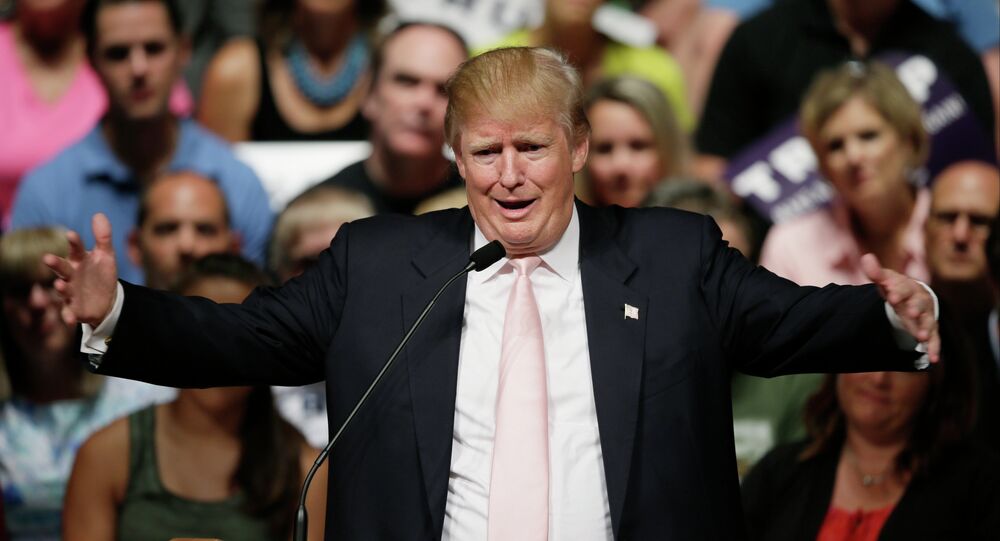 The scandalous billionaire and real-estate mogul turned US presidential candidate Donald Trump has claimed he’s displeased that the US has to confront Russia over the Ukraine crisis and slammed Europe saying they should take the lead in resolving the problem rather than standing aside.

© Flickr / Gage Skidmore
Donald Trump Named as Kremlin Agent by Ukrainian 'Enemy List' Website
Donald Trump said in an interview to NBC that he’s dissatisfied with what’s going on in Ukraine and emphasized that European states should bear the load of responsibility for dealing with the crisis, as it apparently “affects Europe a lot more” than the US.

He continued by saying that Europe’s “great leader” Germany should be in charge of Ukraine’s problems resolution, but not the US.

“Why are we leading the charge in Ukraine?” he said. “I'm certainly not a fan of us [US] being against Russia… for Ukraine when Germany is sitting back, you know, accepting all the oil and gas that they can get from Russia."

“[O]ne of the reasons that [German Chancellor Angela] Merkel's a great leader is she sort of says, 'Oh, good, let the United States handle it,'" Trump concluded.

The tycoon also said that there is no need for Ukraine to join NATO, saying “If it doesn’t go in, great.”

© AP Photo / Greg Allen
What If Trump Were Elected President? 'US Will Annex Mexico in 2020'
As Radio Free Europe reported, the 2016 Republican presidential hopeful said at a campaign event that if he became the leader of the US, he “would have a great relationship with Russia and [Russian President Vladimir] Putin.”

Kiev authorities, who came to power as the result of the revolutionary coup, launched military operations against the rebellious residents of Donbass region in the east of the country over a year ago. In February, in the Belarussian capital Minsk, the ceasefire agreement between Ukraine and Donbass self-proclaimed republics DPR and LPE was inked through mediation of diplomats from Russia, Germany and France. But, since then, it was violated numerous times.

Trump to Deport All Undocumented Migrants From United States as President