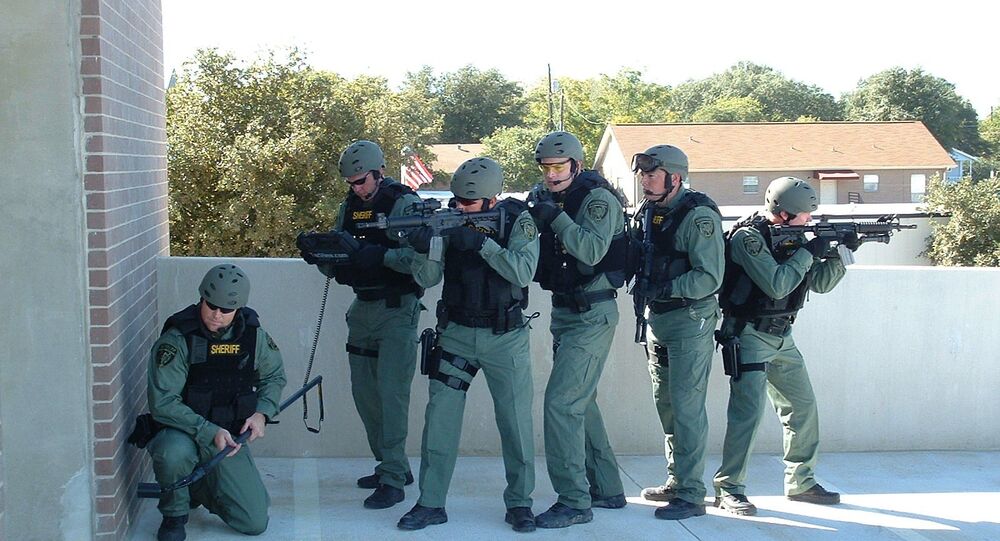 The Drug Policy Alliance Policy Manager Michael Collins claims that the US government’s continued militarization of the police forces runs counter to its rhetoric of winding down the War on Drugs.

WASHINGTON (Sputnik) — The US government’s continued militarization of the police forces runs counter to its rhetoric of winding down the War on Drugs, the Drug Policy Alliance (DPA) told Sputnik on Thursday.

"There is a real disconnect with the Obama administration’s rhetoric of ‘We are ending the War on Drugs’. Meanwhile they are literally putting equipment used for war on the streets of US cities to be used for counter-narcotics activities," DPA Policy Manager Michael Collins told Sputnik.

Mother Jones reported this week that fully a quarter of US law enforcement requests for military-like armored vehicles, or MRAPs, obtained through a Pentagon program were justified for being used in the War on Drugs.

© Flickr / Vladimir Badikov
US Police Militarization Causes Surge in Killings of Blacks by Officers
In some cases, police forces even justified their requests by stating they need such equipment to battle the production and procurement of marijuana, which is legal in four US states and in Washington, DC.

Since the 1990s, the Pentagon has run a program to transfer excess military equipment to local law enforcement agencies, including the iconic mine resistant MRAP vehicle.

The program gained momentum after the September 11, 2001 terror attacks against the United States, and the excess military equipment from two wars in Afghanistan and Iraq.

"One of the main problems with the program is that law enforcement is given preferential treatment… to conduct counter-narcotics activities," Collins said.

Collins added that there has also been a "deliberate conflation between the terminology of the War on Terror and the War on Drugs."

The United States has the largest prison population in the world, and about half of all inmates are in jail on non-violent drug-related offences, according to the US Bureau of Justice Statistics.

© Flickr / Chris Yarzab
US MPD Chief Favours ‘Militarized Policing’ of Black Communities - Activist
The high number of drug-related arrests has caused some officials to question the efficacy and necessity of the War on Drugs and high imprisonment.

Collins, whose organization met with Obama administration officials during a review, said the administration "really only made minor tweaks to the program" that provides local law enforcement militarized equipment.

Following a series of high profile instances of police brutality and militarized police response to protests, the US public has grown increasingly wary of the militarization of police forces.

The Obama administration has said it would review policies and procedures, and call for better police-community relations.

Collins pointed out to disconnect between public opinion over drugs and police militarization.

While the US public opinion in shifting, he said, law enforcement considers the War on Drugs as a source of employment, equipment, and funding.

"[I]t is a stream of money," Collins stated.

While most Americans would say they do not want to see MRAPs and tanks on the city streets, and law enforcement should not use such equipment to pursue marijuana prohibition, "we still see law enforcement using this equipment for those reasons and that is very disappointing," Collins concluded.