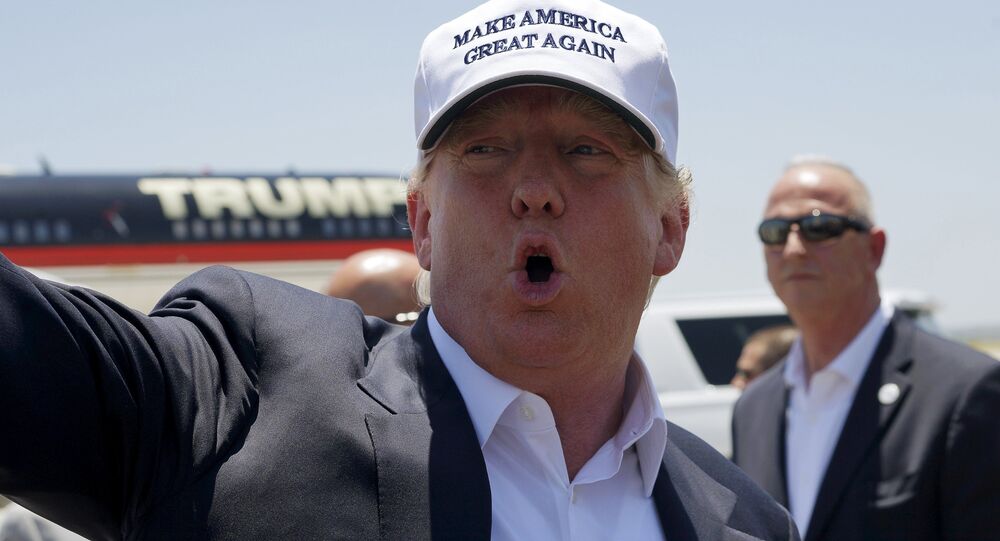 Donald Trump tops the list of Republican presidential hopefuls but still trails behind the leading Democratic candidates, a poll showed.

“With 20 percent of Republican voters, Donald Trump is the clear leader in the crowded Republican presidential primary field, but he trails any of three leading Democratic contenders by wide margins in general election matchups,” the poll read.

Former US Secretary of State Hillary Clinton is a front-runner for the Democratic Party with 55 percent of voters nationwide, while US Senator Bernie Sanders and Vice President Joseph Biden, who has yet to announce his presidential bid, trail Clinton with 17 and 13 percent respectively, according to the poll.

Twitter / aaronnemo
The Crazy World of Donald Trump
Trump is followed by Wisconsin Governor Scott Walker with 13 percent and former Florida Governor Jeb Bush with 10 percent, while no other Republican tops 6 percent, the poll said.

Trump and Clinton also top the "no way" lists in their parties of voters who would definitely not support them.

The multi-billionaire real-estate tycoon has become a controversial figure in the Republican establishment over comments on immigration and criticism of prominent Republicans. His comments have created a media frenzy.

Trump, Clinton Most Untrustworthy Among US Presidential Candidates

US presidential candidates Hillary Clinton and Donald Trump are least trustworthy among contenders for the office, the poll said on Thursday.

“Trump and Clinton have the worst scores among top candidates on honesty and caring,” the poll read.

Fifty-eight percent of voters consider Trump dishonest and untrustworthy, while 57 percent think the same of Clinton, according to the poll.

Moreover, 63 percent of respondents say Trump does not care about their problems. Meanwhile, 52 percent of the polled thought Clinton would pay no attention to their needs.

"Republicans say Trump is honest and Democrats say Clinton is honest, but among all voters, both candidates come up short," Quinnipiac University Poll assistant director Tim Malloy said. "How can you become a general election front-runner if most voters don't trust you?"

At present, US billionaire Trump is leading the pack of 2016 Republican presidential candidates with 20 percent of votes, while former US Secretary of State Clinton is a front-runner for the Democratic Party with 55 percent of voters nationwide, according to the poll.

On July 18, Trump slammed US Senator John McCain’s Vietnam War record, saying he became a war hero because he was captured, and added that he likes people who were not captured. The comment created a backlash, with McCain urging Trump to apologize to US prisoners of war.

Hillary Clinton's Climate Plan and the Awful Truth About It