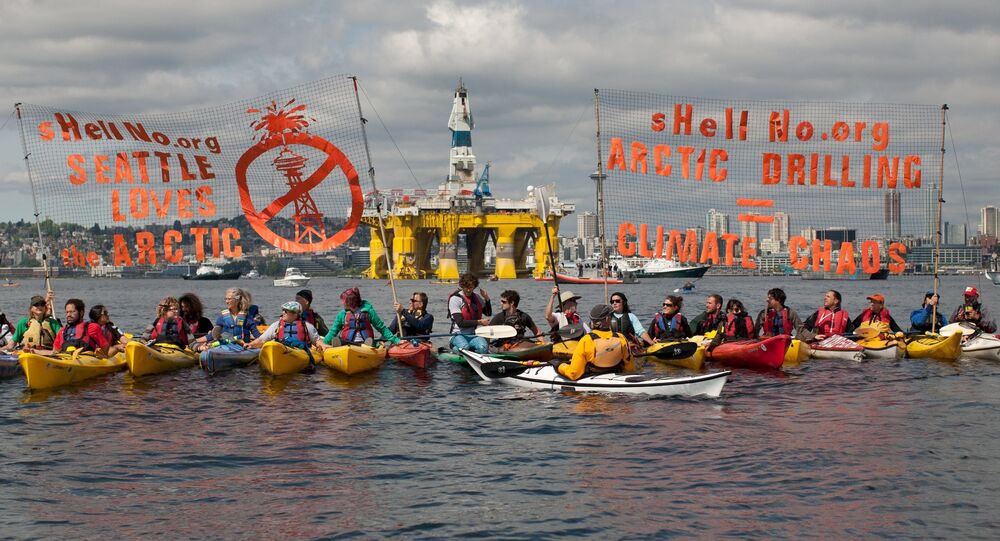 Three Greenpeace kayaktivists out of approximately 45 those attempting to block Shell’s Drilling Rig Departure to Arctic arrested by US Police in response of the Dutch Oil Company’s controversy plan to drill off Alaska’s coast forming ShellNo human line in the Elliot Bay off Seattle.

MOSCOW (Sputnik) — Police in the US city of Seattle arrested three Greenpeace activists on kayaks, attempting to block departure of Shell’s oil rig, Polar Pioneer, to the Arctic, the environmental group said on its Twitter page on Monday.

Earlier in the day, the activists formed a human line in the Elliott Bay off Seattle, hindering a way for an oil rig.

@CMMikeOBrien arrested by US Coast Guard during kayak blockade of the Arctic drilling rigin #Seattle pic.twitter.com/wC3rcQQkrA

“Three kayaktivists have been arrested but many more remain,” the environmental group tweeted.

The Greenpeace added that "the rig is on the move despite the brave and heroic efforts by kayaktivists."

According to the images, published on Twitter, police rolled up an anti-Shell banner, stretched on the water by the activists.

About 40 to 50 ShellNo activists in kayaks participate in the protest, local Kiro 7 TV Channel said.

Bureau of Ocean Energy Management allowed it to begin drilling off Alaska's coast this summer.

Right now kayaktivists are blockading Shell in Seattle port. Watch here as they stand up for the millions who demand an…

Shell's Arctic drilling plans have stirred controversy in Seattle, with Mayor Ed Murray and the city council openly voicing opposition to the oil giant’s presence in the Seattle’s port.