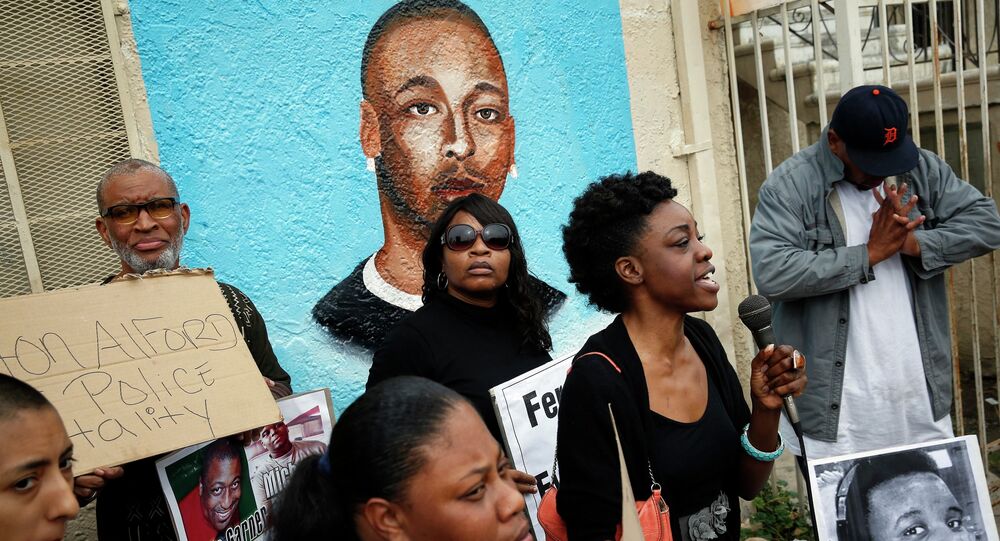 The Los Angeles Police Department Chief, the LAPD inspector general, and the department's civilian watch dog have found the shooting of Ezell Ford to be justified, sources have told media.

Ezell Ford was a diagnosed bipolar schizophrenic who was shot last year by a police officer following a struggle. His death sparked protests and further enflamed the public debate regarding police's use of deadly force.

© East News / AP/FOTOLINK
To Protect and to Serve? LA Police Brutally Beat, Kill Homeless Man (VIDEO 18+)
Department investigators found evidence that Ford had reached for officer Sharlton Wampler’s gun, according to two sources who spoke to the L.A. times on condition of anonymity because they were unauthorized to publically discuss the case.

Sources say Ford’s DNA was found on Wampler’s weapon and scratches were made on the officer’s holster as well as his hand.

LAPD Chief Charlie Beck said last year that officer Wampler and his partner Antonio Villegas told department investigators that Ford had forced one officer to the ground and grabbed his gun, prompting the other officer to fire his weapon. The officer on the ground used a backup weapon to reach around Ford’s body and shoot him in the back.

An autopsy revealed Ford was shot three times including in the back where the gun’s muzzle left an imprint.

The ordeal began on Aug.11 when officers Wampler and Villegas, members of an anti-gang unit in the department’s Newton Division, observed Ford walking down a street near his South L.A. home before they approached him.

Sources say the officers walked up to him because they had seen Ford discard narcotics. The department has yet to state publically whether narcotics were recovered from the scene.

© AP Photo / Susan Walsh
Obama Says Racial Divisions Absent in US 'Day-to-Day Interactions'
The officers’ attorney Larry Hanna said his clients “had little choice but to make contact with Ford when they saw him turn away and appear to conceal something.”

Even though LAPD Inspector General Alex Bustamante found the shooting justified, he disapproved of the way the officers approached Ford, according to sources.

Bustasmante wrote in his report to The Police Commission, the department’s civilian watchdog, that it’s unclear whether the officers were just in approaching Ford and he called one officer’s initial touching of Ford “unacceptable.” Under department policy, officers in such situations are supposed to approach a suspect from a position of safety such as behind an open car door.

“Why didn't they just allow him to keep walking?” asked Ford’s mother Tritobia during an interview with an L.A. Times reporter. “He wasn't doing anything. He wasn't committing any crime. He wasn't bothering anybody."

© REUTERS / Patrick Fallon
Ezell Ford Autopsy: Unarmed Mentally Ill Man Shot 3 Times by Police
The Police Commission which has the final word on police’s use of violent force is scheduled to privately discuss the case on Tuesday.

According to the L.A. Times, Beck will recommend the commission clear officers; meanwhile, Bustamante will advise the panel to fault the officers for their tactics.

If Bustamante succeeds, it will be up to Beck to determine the disciplinary action.

Craig Lally, president of the union that represents rank-and-file officers, defended the officer’s use of deadly force.

"The officer has a right to defend themselves," Lally said. "They have no other alternative."