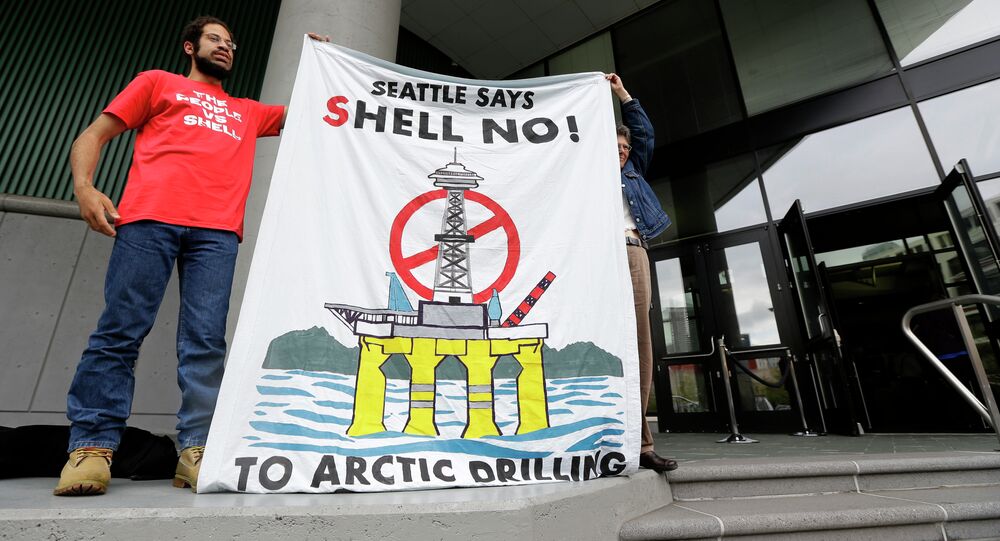 Environmental groups in Seattle are planning a kayak protest this weekend against oil giant Shell’s drilling plans in the Arctic Ocean, Greenpeace told Sputnik on Tuesday.

WASHINGTON (Sputnik) — Two of Shell’s oil rigs — the Polar Pioneer and Noble Discoverer — will stop in Seattle in the next week on their way north to drill during the summer. Shell plans to plant to two rigs at the Port of Seattle during the winter.

Raising paddles in Seattle to ward off an oil giant. #kayaktivists http://t.co/ygyVe1dfBO pic.twitter.com/VH5rMW9n72

“Saturday is the kayak flotilla, which is where ‘kayaktivists’ will be in the water protesting not only Shell and its presence in Seattle but projects like Arctic drilling and their contribution to climate change in general,” Greenpeace Arctic Media Officer Cassady Sharp told Sputnik.

The protest is expected to bring up to 1,500 ‘kayaktivists’ from Greenpeace and local environmental organizations out into Seattle’s Elliott Bay.

Shell’s plans have come up against local opposition and Seattle’s Mayor, who have argued Shell’s drilling rigs are not cargo vessels and require a different environmental review to dock at the port.

The Port of Seattle is expected to meet after the Seattle City Council passed a resolution urging the Port to review the leasing terms of the oil rigs.

The hang up comes after the US Bureau of Ocean Energy Management (BOEM) on Monday approved Shell’s multi-year exploration plan to drill for oil in the Chukchi Sea off Alaska’s coast.

These 'kayaktivists' are taking to the seas to stop @Shell from drilling the Arctic http://t.co/YTpj5isGpK pic.twitter.com/LlP5jbOlGt

The company received the drilling permission even though it has not operated in the Arctic since 2012 when it faced a number of safety and operation difficulties, including an oil rig running aground.

The Noble Discoverer failed in April 2015 to pass a US Coast Guard inspection and was held up in Hawaii to repair an oil-water separator. The contractors operating the rig pleaded guilty to eight felonies and received $12.2 million in fines for violations the last time Shell drilled in the Arctic in 2012.