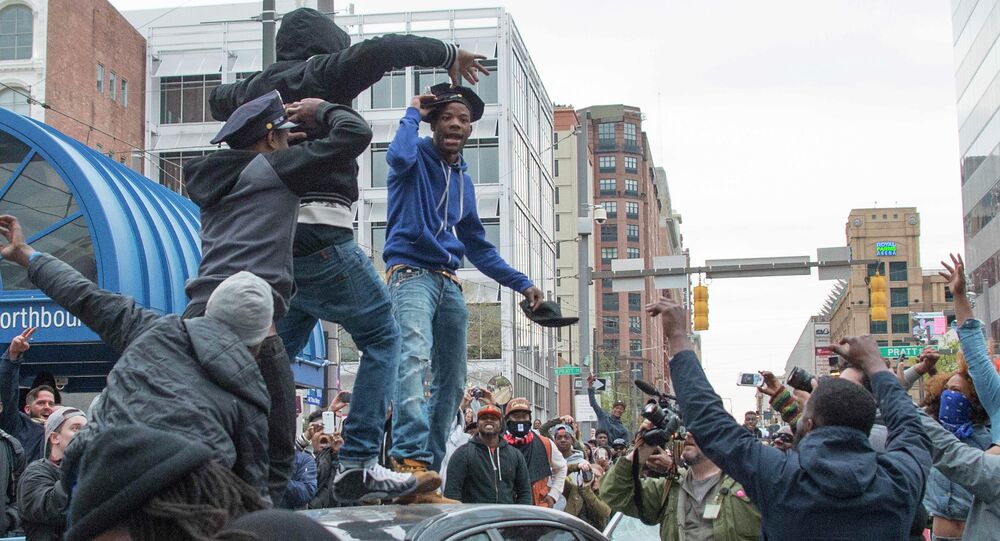 The man who shot the video of Freddie Gray’s arrest was released Friday after being arrested at gun point.

The death of Gray, who suffered fatal spinal injuries while in police custody after being arrested for possession of a switchblade in April, sparked violent riots and a week-long curfew in Baltimore.

Reporter Gets 48 Hours… in Jail

Among the violence was reporter Shawn Carrié, who spent 48 hours in jail after reporting the mayhem.

© AP Photo / Juliet Linderman
Another Day, Another Rally: Baltimore Gears up for More Protests
On April 27, Carrié heard about a riot taking place outside the Mondawmin Mall. He arrived at the scene to find police clashing with protesters, who were hurling bricks at their targets from as little as 10 feet while tear gas filled the air.

Armed with a camera, he ran with police as they charged against what he called “a throng of rioters.” Somewhere in the chaos, he was struck by a rubber bullet. Everything went black for a moment, and then he got back to work.

The intersection eventually cleared and a squad car stood by the reporter as an officer told him he needed to go. Carrié said he produced his press pass and asked where to go, before a captain yelled, “Him! He goes!”

Carrié said he was then struck to the ground, put in handcuffs, and taken to Baltimore City Jail where he claims to have had his rights violated under the fourth, fifth, sixth, and eighth amendment’s.

© AP Photo / Patrick Semansky
Baltimore Riots: Police Officers 'Did Nothing Wrong' - Lawyer
He said he was given a “uniform regimen of one elementary school milk carton and four slices of laundered bread-matter with one slice of either a yellowish cheese substance, or processed bologna.”

Although Carrié ended up not receiving any charges, he did spend time with people who were eventually charged with arson, burglary, and disorderly conduct as well as a teenager who was caught with a firearm.

He shared a cell with two teenagers who were charged with disorderly conduct and given $150,000 bail.

Break a Window, Get Twice the Bail

Allen Bullock, who was arrested for smashing a Baltimore Police Department vehicle’s window, was handed a higher bail than that which was given to any of the six police officers who face charges in the death of Gray. Bullock got bail for $500,000, while each of the six officers received bale ranging from $250,000 to $350,000.

Youtube/producertony2001
Baltimore Police Arrest Author of Freddie Gray’s Detention Video
An image of Bullock smashing the police car’s window was broadcasted nationwide along with other documentation of the mayhem. That imagery has prompted several politicians and even the president to publically denounce the perpetrators as “thugs.”

But in a highly publicized string of events like the Baltimore Riots, even a term is being analyzed.

Who You Calling a Thug?

Newsweek recently published a piece called “A Brief History of the Word ‘Thug.’”

It traces the term’s history back to a Hindi word meaning a cheat or a swindler. The story also follows its evolution throughout several regions as it came to often be associated with violence and eventually racial notions as argued by several scholars.

Another Day, Another Rally: Baltimore Gears up for More Protests