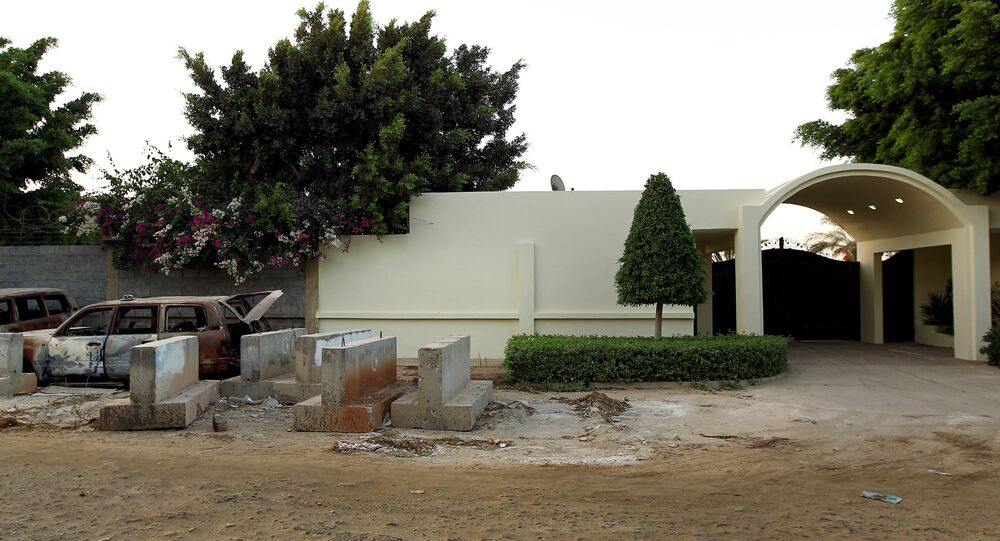 Hillary Clinton faced criticism of her response to the September 11, 2012 attack on the US consulate in Benghazi that killed Ambassador Chris Stevens along with three employees.

© Sputnik /
Committee on Benghazi Requests Clinton to Provide Server to Third Party
MOSCOW (Sputnik) — Former US Secretary of State and perennial presidential hopeful Hillary Clinton kept a close watch on the aftermath of the 2012 terrorist attacks in Libya that killed four US citizens, the New York Times reported Monday.

Earlier in March, Clinton requested that the Department of State release all non-personal emails during her tenure from 2009 to 2013 after the publication broke the story that she used a personal email account for work-related communications. It goes on to say the State Department passed on about 300 of Clinton's emails to the House Select Committee on Benghazi last month.

Citing four senior government sources who have access to the emails in question, the New York Times says Clinton turned to her aide on the day that the Benghazi committee questioned a top State Department official to inquire whether a crisis had been averted.

© REUTERS / Mike Segar
Boehner Urges Clinton to Turn Over Email Server She Used at US State Dep't
"Did we survive the day?" Clinton wrote to her adviser, who wrote back, "Survive, yes."

However, the emails did not suggest any wrongdoing by the former state secretary, who has explained the fact that she did not have a State Department email account as a matter of convenience.

The former state secretary has faced criticism of her response to the September 11, 2012 attack on the US consulate in Benghazi that killed Ambassador Chris Stevens along with three employees.

Republican lawmakers claim the State Department and the White House misled the public by not sending military backup to Benghazi in an effort to avoid classifying the attack as an act of terror rather than a "spontaneous" response to a US-made anti-Islamic film.

© AP Photo / Richard Drew
Republicans in House to Launch Investigation Into Clinton Email Scandal
Several officials, including Chairman of the Benghazi Committee Trey Gowdy and House Speaker John Boehner, have called on Clinton to release all of her emails and turn over her personal server to a third party for an independent review.

Though she has yet to officially announce a presidential campaign, polls show Clinton leads all the presidential candidates fielded by the Republican Party, with an even wider margin among Democrats.

State Department Denies Being Under Pressure in Clinton Email Controversy