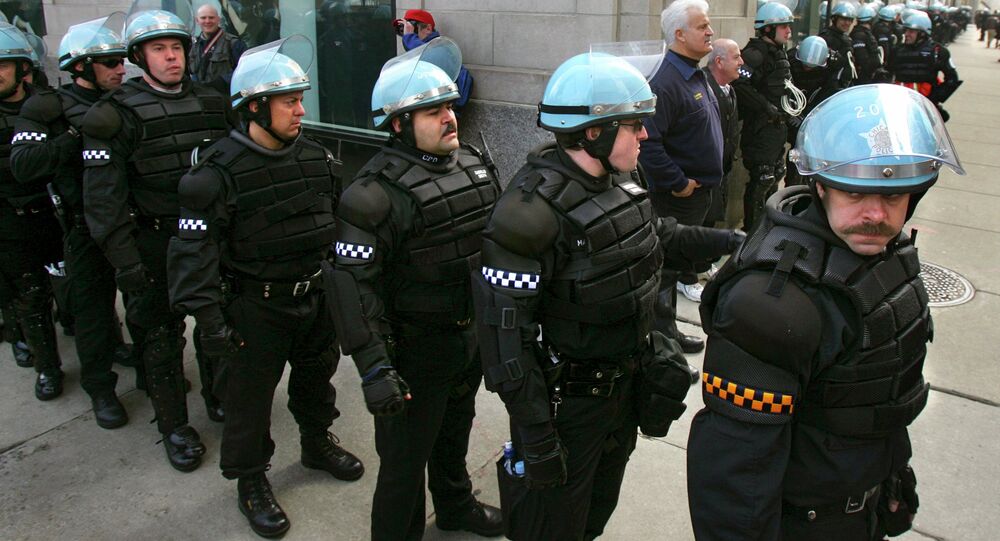 Minnesota just became the latest state to consider a bill that would stop the militarization of police authorities in the state. For years, the federal government has been giving military gear to local police but, as controversy has swelled, some legislators are looking to stop the program.

© AP Photo / Jacquelyn Martin
Obama’s Cops Task Force: 'Minimize' Police Militarization
The program was created by the National Defense Authorization Act as part of the Defense Logistics Agency Disposition Services to transfer excess military equipment to law enforcement agencies. More than 8,000 local law enforcement agencies have participated in the receiving an aggregate of $5.1 billion in military hardware from the Department of Defense since its inception in 1997.

States, to this point, have had little input as local police departments would work directly with the Department of Defense.

However, heavily armed police raids that have often ended up in the death of innocent bystanders as well as low-level targets have engendered a great deal of controversy. Many started to ask how the police became so well armed with military-grade helmets and shields, armored carriers and weapons. Program 1033 was found to be the culprit.

Media coverage exploded after exposure of the militarized police in Ferguson during the unrest last August and the program drew nationwide public attention.

© AP Photo / Charlie Riedel,
National Guard: Only Deadly Force Could Have Prevented Ferguson Riots
In nearly 80 percent of the cases, SWAT teams were rolled out for nothing more than serving warrants, usually relating to drug crimes, according to the ACLU.

This year, several state legislatures are now looking at ways to curb the militarization of local police departments with Minnesota being the latest to introduce a bill.

“No state or local unit of government or law enforcement agency may acquire military grade weapons pursuant to Section 1033 of the National Defense Authorization Act for fiscal year 1997,” it says.

The bill, SF1358, defines “military grade weapons” as “militarily equipped vehicles and aircraft, weapons and other objects designed to primarily have a military purpose or offensive capability, and ammunition.”

In Montana, Rep. Nicholas Schwaderer, introduced HB330 earlier this year which would place limits on the types of military equipment a local or state police department can purchase, audit the current inventory, and require oversight of allowed military grade equipment.

© REUTERS / Stephen Lam
Expert Says More Money, Equipment, Not Solution to Fixing US Police
Schwaderer’s bill prohibits police departments from accepting “automatic weapons not generally recognized as suitable for law enforcement purposes; drones that are armored, weaponized, or both;… grenades or similar explosives, including but not limited to flash-bang grenades, stun grenades, and grenade launchers,” and “tanks or tank-like vehicles,” among other things.”

It also prohibits police from accepting equipment paid for by the federal government, curtailing their ability to accept free goods.

New Hampshire is also considering a bill, the Police Equipment and Community Engagement Act, originally introduced by Rep. J.R. Hoell. HB407 would ban state and local government officials from obtaining military hardware that is “not readily available in an open national commercial market.”

“New Hampshire counties, cities, and towns have received over $6,000,000 in military hardware, including almost 400 military grade rifles, an armored truck, and a grenade launcher,” the bill says. It also notes that “New Hampshire has received grants to purchase several BearCat type armored personal carriers priced at $265,000 that are not included in the above totals.”

“At the end of the day, we have a law enforcement agency that is more militarized than we intended,” Hoell has said.

New Jersey Gov. Chris Christie actually signed a bill into law last week that serves as a first step towards blocking federal programs that militarize local police in the state. Introduced by Sen. Nia Gill, S2364, bans local law enforcement agencies from obtaining this equipment without first getting approval from their local government. Since the transfers usually occure directly between the police agencies and the federal government, this would reintroduce the local government in the decision making process, giving residents the ability to end it or, at least, forcing the process into the open.