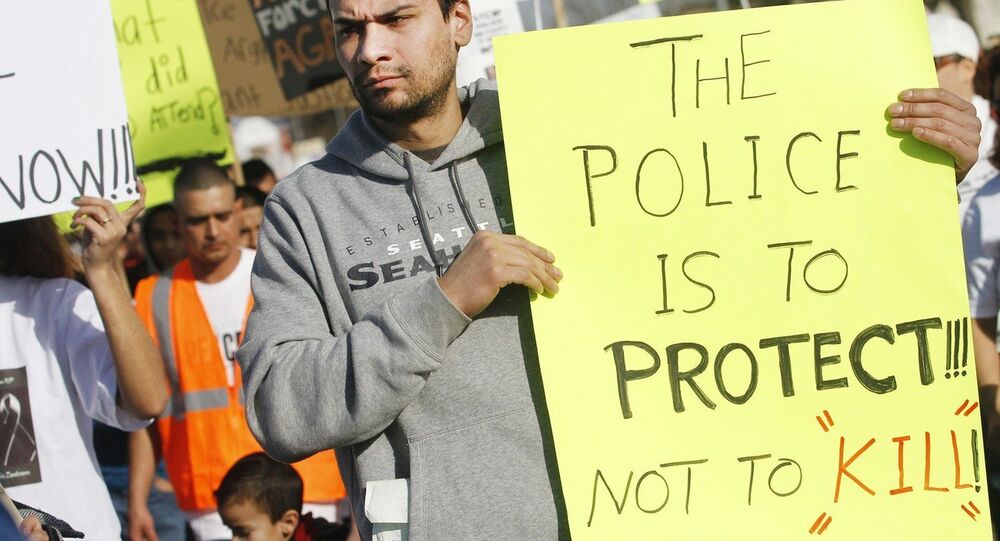 A shocking video emerged apparently showing police officers firing several shots at a man after trying to subdue him, bringing the issue of police brutality back into the spotlight.

A shocking video emerged on Facebook apparently showing police officers shooting and killing a man, known only as Africa, in downtown Los Angeles in broad daylight. He was pronounced dead at the scene.

The incident, filmed by an onlooker, took place on Skid Row outside the Union Rescue Mission, a homeless shelter.

Just watched a video, looks like LAPD killed a robbery suspect in cold blood. He was struggling but pinned, I saw no gun #skidrow

#SkidRow Police shoot #homeless man. I DO NOT see how he was a threat w/ all those cops on top of him https://t.co/RiwsfoTw26

The police responded to a 911 call about a possible robbery. The suspect started fighting when the officers tried to arrest him, LAPD said. One of the policemen used a Taser on the man but it proved ineffective.

During the events of the radio call of a robbery, #lapd officers made contact with a suspect who immediately began fighting officers

#lapd officers attempted to use a #TASER to subdue suspect but suspect continued fighting and resisting. Suspect fell to the ground…

The shooting took place when the man alleged reached for an officer’s service weapon and a struggle ensued.

While on the ground,suspect and #lapd officers struggled over one of officer's handgun at which point an officer involved shooting occurred

Los Angeles police Commander Andrew Smith said that a "thorough and complete" investigation would be conducted into the circumstances of the incident, seen by some as yet another example of excessive use of deadly force by the police. The officers, involved in the incident, were placed on administrative leave.

Los Angeles we are coming. #SkidRow

A group of activists held a vigil in downtown Los Angeles following the shooting.

Protesters say the man who was shot was known as "Africa" and known to be mentally ill. #SkidRow #OIS #LAPD pic.twitter.com/8e0XlATitC