The proposed document approves limited ground operations against the Islamic State terrorists, such as rescue missions involving US or coalition personnel, but excludes "enduring" combat.

© AP Photo / Evan Vucci
Obama Asks Congress to Authorize Limited Ground Operations Against ISIL
WASHINGTON (Sputnik) — US President Barack Obama's Authorized Use of Military Force (AUMF) is crucial, but there is still no strategy outlined in the authorization that determines how it will help to degrade and destroy the Islamic State terrorist group, US Republican Speaker of the House John Boehner said during a news conference on Wednesday.

"This use of military force to deal with IS is an important step forward and I think the president is going to have to make his case to the American people," Boehner said. "The President [Obama] should have all the tools necessary to win the fight that we're in and so as you've heard me say over the last number of months, I'm not sure that the strategy that's been outlined will accomplish the mission the president says he wants to accomplish."

President Obama's goal of dismantling and destroying the Islamic State is one in which the House Speaker Boehner argued “I haven’t seen the strategy yet that I think will accomplish that."

Boehner stressed that Obama’s request was only “the beginning of a legislative process, not the end," and said that Congress would likely make changes to the AUMF as it makes it way through the next stages of the legislative process.

On Wednesday, President Obama signed a message to the Congress with respect to draft legislation on the AUMF in connection with the Islamic State, according to the White House. 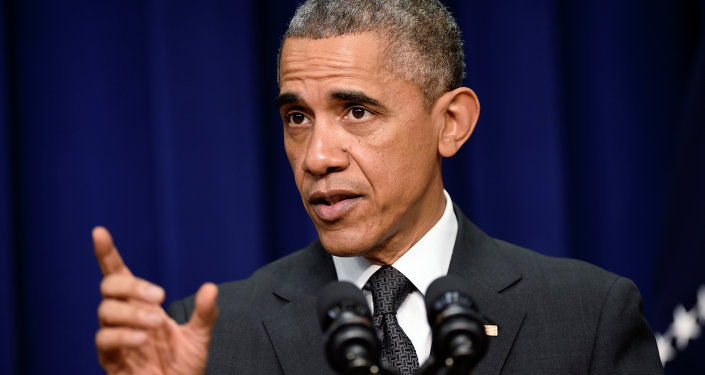 © AP Photo / Susan Walsh
Obama to Deliver Statement on Islamic State War Authorization Request
The proposed document approves limited ground operations against the Islamic State terrorists, such as rescue missions involving US or coalition personnel, but excludes "enduring" combat. The draft authorization is said to terminate three years after the date of the enactment.

The Obama administration has relied on the use of force authorizations from 2001 and 2003 to legally justify US military strikes against Islamic State targets in the two countries, where the extremists have proclaimed the establishment of an Islamic caliphate across areas under their control.