An outbreak of measles in California, linked to visits to the Disneyland theme park, has continued to gather pace and spread to neighboring states. 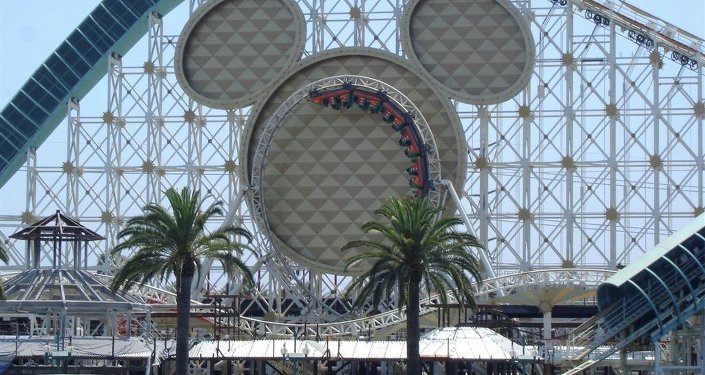 © Flickr / radiobread
Nine Measles Cases Probably Caught at Disneyland Resort
MOSCOW, January 31 (Sputnik) – The California Department of Public Health said on Friday that the confirmed number of cases of measles in the state has risen to 91, up from 79 documented cases on Wednesday.

"California is currently experiencing a large outbreak of measles," the department stated. "The outbreak started in December 2014 when at least 40 people who visited or worked at Disneyland theme park in Orange County in mid-December contracted measles and has now spread to at least half a dozen other states."

Of the 91 people in California who are known to have contracted the virus, links with the theme park have been identified in 58 cases. According to investigations by health officials, 40 caught it when they visited Disneyland, while another 18 were subsequently exposed to a sick person who had visited the theme park, either as a visitor or as a worker.

CBS reported on Wednesday that 1,000 people in neighboring Arizona were being monitored for signs of the disease in an effort to keep the number of infections down to the seven which had been documented at that point. Arizona Department of Health Services Director Will Humble said that those who have not been vaccinated must stay at home for 21 days, or wear a mask if they have to go out in public.

© Sputnik / Mikhail Mordasov
WHO Committee Reviews Western Pacific Region’s Progress in Responding to Health Challenges
"To stay in your house for 21 days is hard," Humble told CBS. "But we need people to follow those recommendations, because all it takes is a quick trip to the Costco before you're ill and, 'bam,' you've just exposed a few hundred people. We're at a real critical juncture with the outbreak."

In addition to the cases in Arizona, infections have also been recorded in Mexico and at least five other states in connection with the Disneyland outbreak: Utah, Washington, Colorado, Oregon, and Nebraska. According to AP, health authorities are still searching for "patient zero," the person who first brought the illness to the theme park. It is believed the individual caught the measles in another country and then visited the park during the holidays.

In 2000 measles was declared eliminated in the US, meaning that it not constantly present in the country, but can still be brought in by unvaccinated travelers from abroad. In 2014 the number of people in the US with the measles rose to a high of 644, after a low of 37 in 2004. Last year one outbreak among the unvaccinated Amish population in Ohio led to 383 people falling ill after missionaries caught the virus when visiting the Philippines.

Measles, Mumps Make a Comeback in US