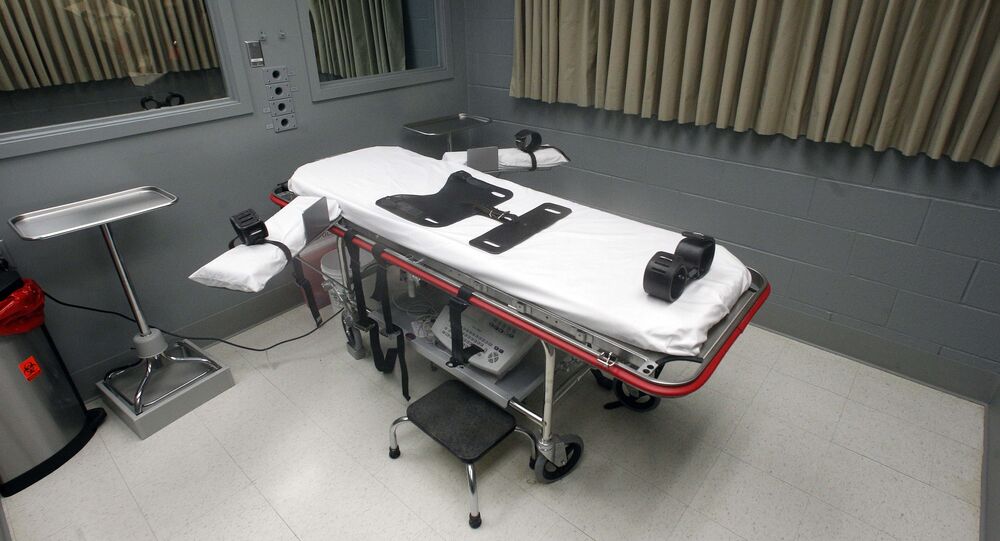 Cruelty of Lethal Injections on Trial in US Supreme Court

The US Supreme Court will review a lethal injection case to decide whether it violates the Constitution's ban on cruel punishment.

© Sputnik / Igor Mikhalev
US Supreme Court to Rule on State Gay Marriage Bans
MOSCOW, January 24 (Sputnik) — The highest court in the United States is slated to review the petition of four death row inmates regarding midazolam, one of the drugs that is used in the state executions that are performed by Oklahoma, Virginia, Alabama, Arizona and Florida, the BBC reports.

One of those inmates, Charles Warner, was put to death in Oklahoma on January 15 after the Supreme Court refused to delay his execution.

Warner became the first person to be executed in Oklahoma in over eight months following the botched lethal injection of Clayton Lockett in April 2014.

During the execution, Lockett had convulsions and reportedly tried to speak even after doctors declared him unconscious. It took him a presumably agonizing 40 minutes for him to die after he was injected with midazolam.

Supreme Court Justice Sonia Sotomayor has, meanwhile, warned against violating the US Constitution when it comes to the use of execution drugs.

"Petitioners have committed horrific crimes, and should be punished. But the Eighth Amendment guarantees that no one should be subjected to an execution that causes searing, unnecessary pain before death. I hope that our failure to act today does not portend our unwillingness to consider these questions," Sotomayor said.

However, lawyers representing Oklahoma claimed that there is no evidence on midazolam's reported ineffectiveness.

"It is undisputed that Oklahoma's protocol, which is identical to Florida's protocol, has been used 10 times in executions without serious incident.Petitioners can only cite to executions that took place using different drug combinations, or the Oklahoma execution of offender Lockett, in which IV access was subsequently found to be insufficient and flawed," they said.

Apart from Oklahoma, Florida, Alabama and Virginia use the same three-drug cocktail of the sedative midazolam, paralytic vecuronium bromide and potassium to stop the heart.

Other states, including Ohio and Arizona, use in a two-drug combination.

The death penalty is authorized in a total of 38 US States.

The Supreme Court is set to hear the case of four death row inmates in April 2015.