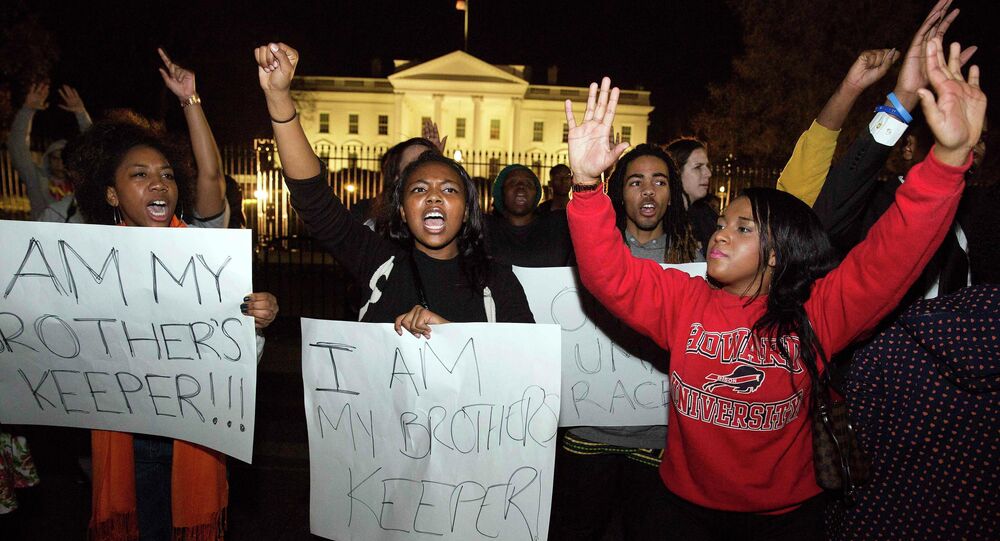 Tensions over police tactics and alleged racism in the force were heightened in the US on Thursday, following the release of a video of an African-American being shot and killed by police while his arms were raised.

NEW YORK, JANUARY 23 (Sputnik) – A police car dashcam video shows Jerame Reid, 36, being shot by a police officer in the city of Bridgeton, New Jersey, as he exited a stopped vehicle with his hands raised on December 30. Reid was the passenger in the vehicle, in which there was a gun.

"I feel outraged, just like everybody else. It's 2015, and we're still living under police terrorism. This is not an issue about being black and white, it's about right and wrong. All I want is for justice to be served," Walter Hudson, chairman of the civil rights group National Awareness Alliance, told Sputnik Thursday.

"He was no threat. I've watched the video over 120 times and have studied it carefully, and I can say that Jerame's hands are clearly up," Hudson, told Sputnik, adding that it was possible to have a difference of opinion, not different facts.

The US has been shaken by nationwide protests following two controversial grand jury decisions last year to not prosecute the white lawmen who killed unarmed black men Michael Brown and Eric Garner.

Garner, 43, a street vendor selling untaxed cigarettes, died from a chokehold by officer Daniel Pantaleo in New York on July 19. Brown, 18, was shot and killed by police officer Darren Wilson while walking down a backstreet in Ferguson, Missouri, on August 9.