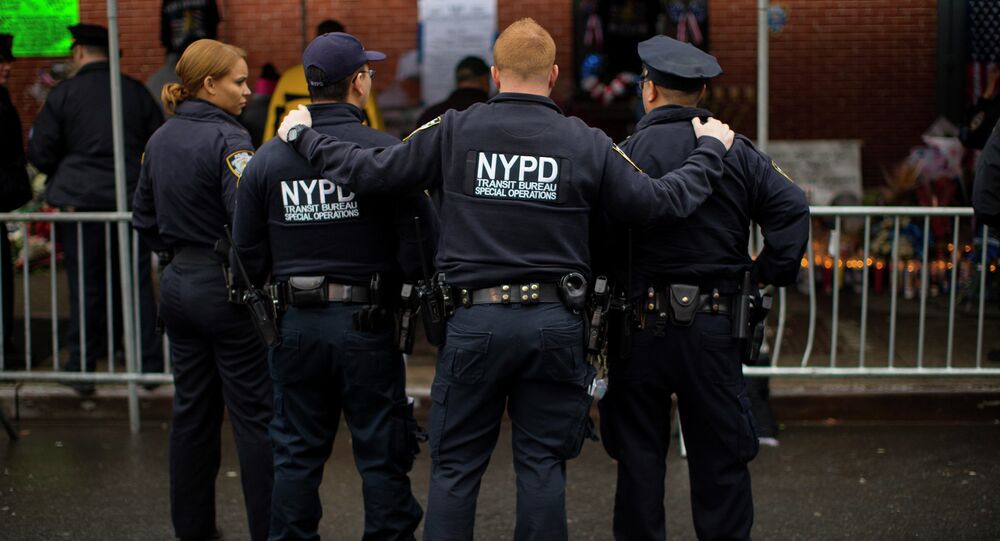 New York City lawyer Peter Farrell stated that NYPD is not violating Muslims' rights since the police "is not prohibiting anybody from attending a mosque", following the recent lawsuit against the surveillance program of the NYPD, that includes spying on mosques.

© AP Photo / Seth Wenig
Only 850 NYPD Officers Sign Petition Asking Mayor Not to Attend Their Funerals
MOSCOW, January 14 (Sputnik) – New Jersey Muslims, who have filed a lawsuit against the surveillance program of the New York Police Department (NYPD), that includes spying on mosques, have ended up in the US Court of Appeals, the Huffington Post reports.

"All the injuries that they [the plaintiffs] allege are self-imposed injuries based upon subjective fears," New York City lawyer Peter Farrell was quoted as saying by Huffington Post Tuesday.

According to Farrell, NYPD is not violating Muslims' rights since the police "is not prohibiting anybody from attending a mosque".

Meanwhile, the judges at the Tuesday hearing in the US Court of Appeals for the 3rd Circuit said that the decline in attendees at mosques, reported by the plaintiffs, is a "concrete injury" since it leads to the loss of money. According to Huffington Post, the judges also pointed to the fact that apprehensions over surveillance are "not a subjective fear".

The judges did not rule on the appeal Tuesday, however, the plaintiffs and their lawyers said they hoped that the ruling of US District Judge William Martini, who had dismissed their lawsuit against NYPD, would be overturned, Huffington Post said.

Martini gave out his verdict in February, 2014, saying that the NYPD surveillance program, first reported on by the Associated Press, was necessary to pin down terrorist conspiracies and was not a civil rights violation.

The eight Muslim plaintiffs filed their lawsuit against NYPD in 2012, accusing the police of having spied on ordinary people at mosques in New Jersey since 2002. The Associated Press has reported that NYPD had crossed the Hudson River to take pictures and eavesdrop on conversations inside businesses owned or frequented by Newark Muslims.