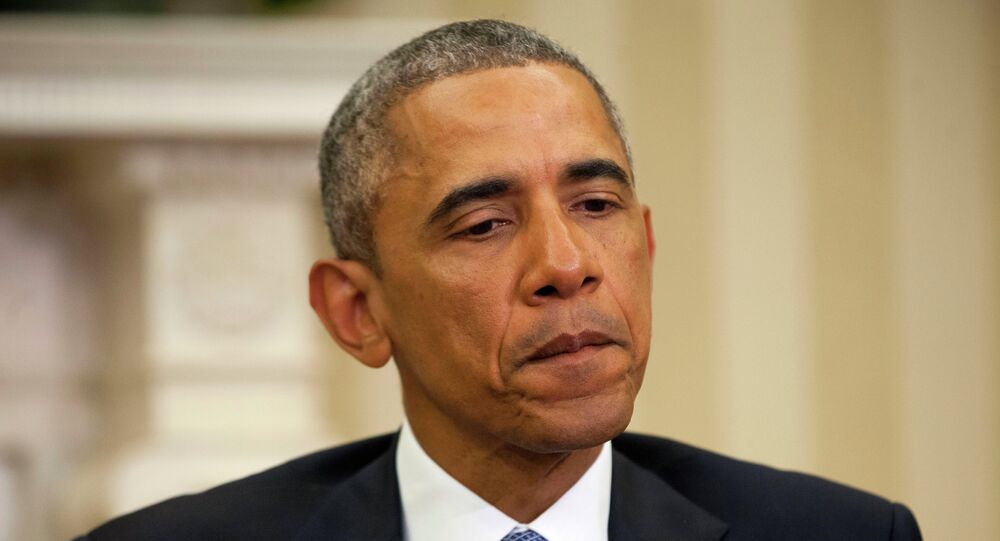 US media have criticized Barack Obama concerning his absence at the Sunday's Paris unity march pointing out that it was one of "the examples of poor judgment" by the US president's team in public relations and communication strategy.

© AFP 2021 / JIM WATSON / FILES
Kerry to Visit France Following Criticism of US Abscence at Paris Rally
MOSCOW, January 12 (Sputnik) — US President Barack Obama did not attend the Sunday's unity rally in Paris that had been joined by more than 40 world leaders, a move resulting in a wave of criticism in the US media.

"President Obama's decision not to attend yesterday's Unity Rally in Paris in response to the terrorist horrors of this past week – a rally attended by 40 world leaders including such polar opposites as Israeli Prime Minister Benjamin Netanyahu and Palestinian Authority President Mahmoud Abbas – may register as his most disturbing, and profoundly harmful, public relations mishap to date," Forbes said.

The magazine pointed out that the US president's absence in Paris was one of "the examples of poor judgment" by the president's team in public relations and communication strategy.

The magazine stressed that no high-level US administration officials had been attended the rally in Paris or a similar event in Washington, D.C.

"The United States of America, Barack Obama, President, was inexcusably absent from one of the most critical turning points in the war between radical Islam and the West since 9/11," the New York Daily News said.

The newspaper noted that Obama's absence reflected a failure to point out the gravity of the attacks on the Paris-based magazine, even though the president's stance on anti-terrorism appeared to remain strong.

© REUTERS / Philippe Wojazer
World Leaders Complete Participation in Paris Unity March Honoring French Terror Victims
On Monday, US Secretary of State John Kerry said he planned to visit France on Thursday to express Washington's solidarity with Paris in the wake of the recent terror attacks, explaining he was unable to participate in the march due to prior commitments.

Last week, three terror attacks took place in France. The first targeted the French satirical magazine Charlie Hebdo on Wednesday and claimed the lives of 12 people. The next day a female police officer was killed and, on Friday, four people were killed after being taken hostage in a kosher food supermarket.

On Sunday, a unity rally in Paris called for an end to extremist violence. The march saw more than three million people in attendance, with more than 40 world leaders walking together linking hands in a symbol of unity and solidarity.