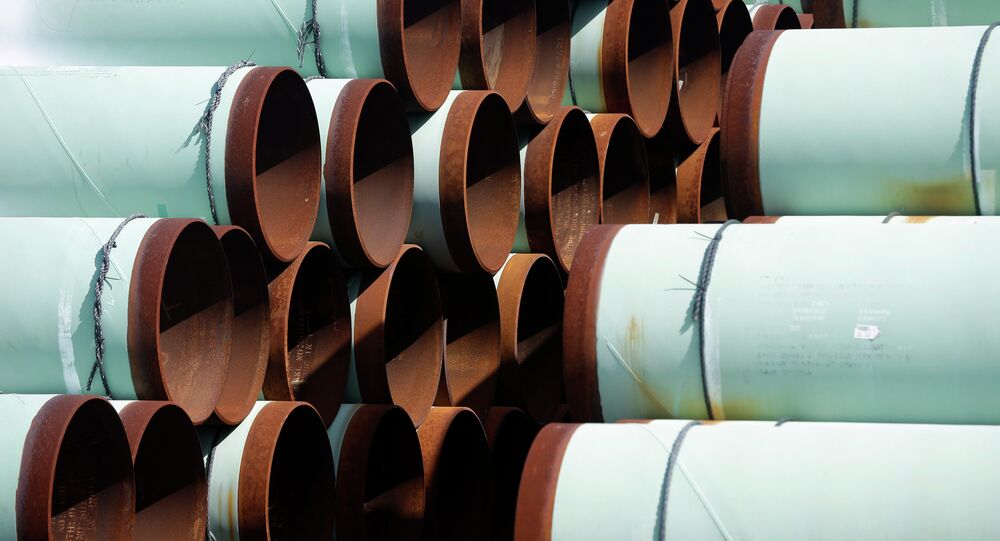 One of the sponsors of the Keystone XL pipeline bill claims that US will benefit from the of the bill approval after it was introduced to the US Congress.

WASHINGTON, January 6 (Sputnik) — The United States will benefit from the approval of the Keystone XL pipeline bill after it was introduced to the US Congress, Democrat Joe Manchin, one of the sponsors of the bill, said Tuesday.

"I am encouraged that the Keystone XL pipeline project will come to a vote on the Senate floor as one of the first pieces of legislation for the 114th Congress," Senator Manchin said at a conference in the Capitol. "We have everything to gain by building this pipeline, especially since it would help create thousands of jobs right here at home and limit our dependence on foreign oil."

© AFP 2020 / Brendan SMIALOWSKI
Obama to Veto Keystone Bill if Passed by Congress: White House
The bill, sponsored by 54 Republicans and six Democrats, authorizes infrastructure company TransCanada to construct and operate the pipeline from Alberta, Canada, to the US Gulf Coast. According to Energy and Commerce Committee estimates, it would allow American refineries to get an additional 830,000 barrels of oil per day.

"The Congress on a bipartisan basis is saying we are approving this project," the chief Republican sponsor of the bill, Senator John Hoeven, said at a conference in the Capitol on Tuesday.

The legislation is currently supported by 63 senators. In the past the project did not pass the Senate as it was shut down by last session's Democratic majority. US President Barack Obama can also veto the bill, which would take 67 votes to overcome.

The hearing on Keystone XL pipeline in US Senate is scheduled for Wednesday and the US House of Representatives is supposed to vote on Keystone bill on Friday.

Activists claim the Keystone XL pipeline project will cause harm through carbon emissions and offer little in return. However, the most recent State Department final Environmental Impact Statement released in January 2014, concludes that there will be no significant impact on the environment.