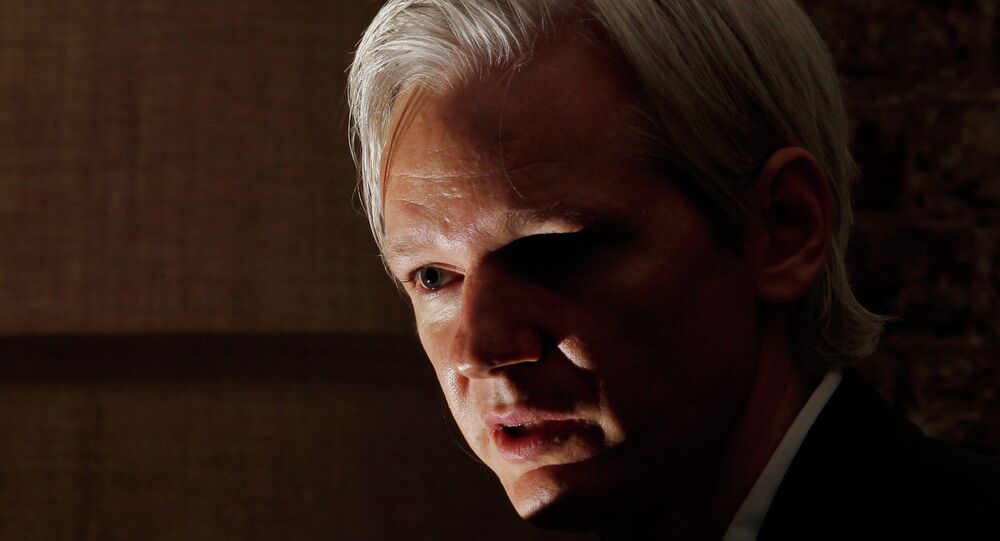 Julian Assange wrote in a statement that the case of Dallas journalist Barrett Brown involves him personally and the work of WikiLeaks.

MOSCOW, December 18 (Sputnik) — WikiLeaks founder Julian Assange expressed support and solidarity for Barrett Brown who is facing up to eight years in prison on hacking charges, according to his statement on the WikiLeaks website.

"The situation involves me personally and the work of WikiLeaks," Assange wrote.

Brown, a Dallas journalist and activist, whose sentencing was delayed until January, faced charges including computer-related crimes and obstruction of justice.

Kim Jae-hwan/Pool
Google to Support Hillary Clinton in US 2016 Election: Assange
"Barrett’s Hunter S. Thompson style, his public lampooning of the U.S. security state and his defense of WikiLeaks and Anonymous did not win him friends in the U.S. administration," WikiLeaks founder said in the statement.

Assange has been holed up in the Ecuadorian embassy in London since 2012, to avoid extradition to Sweden to face sexual assault charges.

Brown has been in federal custody since his arrest more than two years ago.

In April, Brown pleaded guilty to accessory after the fact in the unauthorized access to a protected computer.

According to evidence, Brown assisted a hacker in 2011 to steal confidential information from private intelligence firm Stratfor.

He is also accused of threatening the FBI agents who were investigating him. Brown admitted to interfering with a search warrant and to hiding his laptop from the FBI during a raid at his mother’s home in 2012.

He believes the situation over Brown is "a direct result of his journalistic work."

In December 2010, Beckel called for Assange's assassination by the US special op forces.

WikiLeaks founder cast a doubt on the capability of the Federal Court to deliver a fair sentence in Brown’s case.

"How fine, how noble, how egalitarian. Fair trial rights for the government as well as the defense! Neither the defense nor the government can state their case to the public while Barrett Brown rots in jail awaiting his sentence — except to repeat the formal charges made by the government. Neither the greatest King nor the most destitute beggar may sleep in a box on the street. Fair’s fair!" Assange resumed.

Assange Appears at US Conference Via Hologram