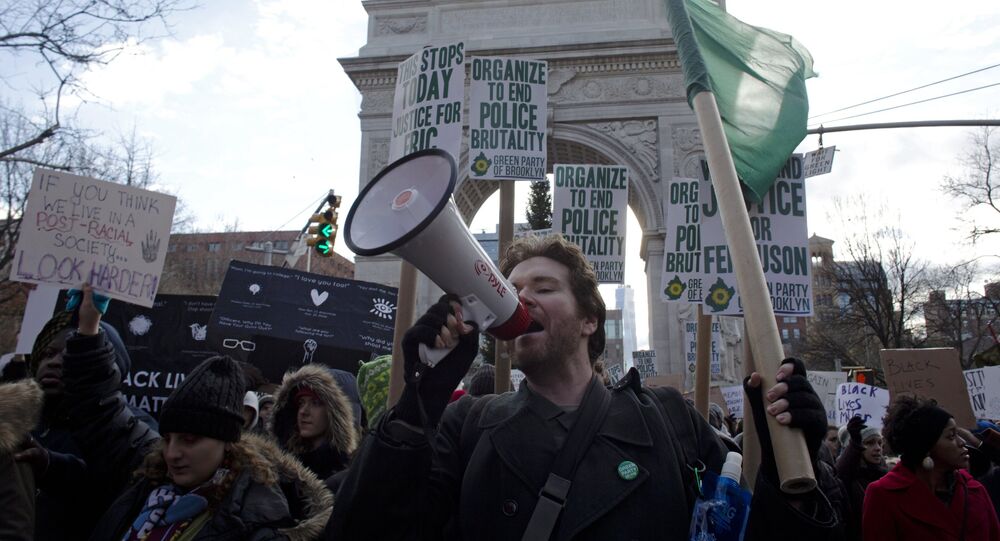 Thousands are marching from New York's Washington Square Park protesting against police violence in what appears to be so far a well-organized demonstration.

NEW YORK, December 13 (Sputnik) – According to the police, the New York campaign is planned better than similar ones.

© REUTERS / Eduardo Munoz
30,000-50,000 Protesters March in Peaceful NYC Rally
The protesters have permits, the streets are lined with barricades, parade like. People have gathered in a large crowd.

Fifth avenue is packed shoulder-to-shoulder with demonstrators. Most are chanting about wanting justice now, but some are calling the New York police racists. The crowd itself is very diverse.

People keep coming to the Central Park, where activists placed a huge poster — enlarged photograph of a black man’s eyes as a collective image of the police victims.

LIVE UPDATES: NY protests. World is watching… and so is #EricGarner http://t.co/fTpzoWINRo pic.twitter.com/PFqgLmKzpq

"How do you spell racist?" "NYPD [New York Police Department]!" Is one of the more provocative chants.

"Hands up, don’t shoot" and "shut the whole system down" are other slogans that can be heard.

A sea of signs float down the street, most asking to stop police brutality, others saying "Black Lives Matter!"

So far the protest is peaceful, but most of the marchers appear focused and even angry.

Not all local residents of the southern and western parts of Manhattan were aware of the march, as result car drivers were blocked in neighbouring streets.

On the eve, over 40 thousand people expressed their intention to join the rally against police brutality.

Garner, 43, died from a chokehold by a white police officer, Eric Daniel Pantaleo, in New York City on July 19.

Michael Brown, 18, was shot and killed by lawman Darren Wilson in Ferguson, Missouri, on August 9.