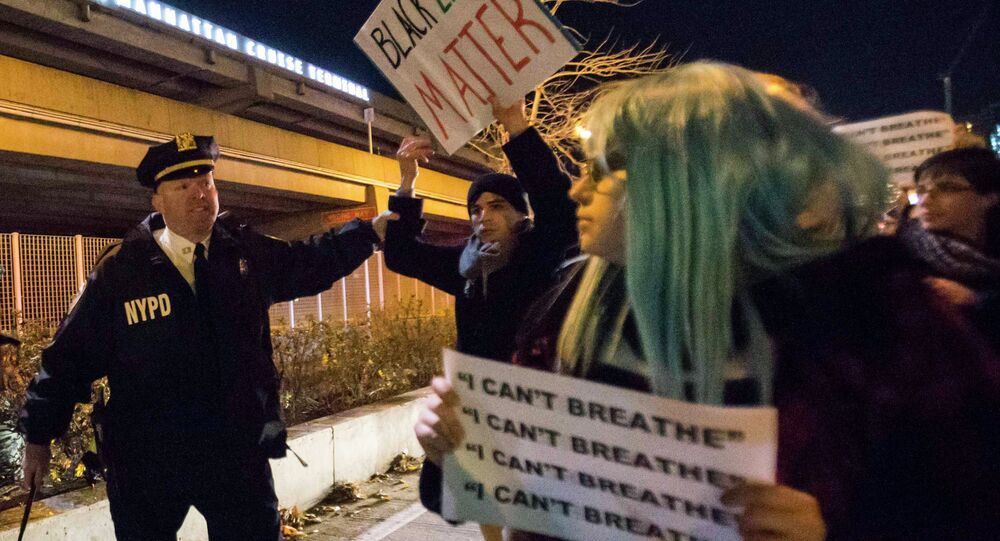 NYPD spokesman said he hoped that the upcoming Saturday rally against police brutality would result in no incidents and would pass peacefully.

© REUTERS / Stephen Lam
Protesters Ready for Clashes With NYC Lawmen Ahead of Rally Against Police Brutality
NEW YORK, December 12 (Sputnik) – Lawmen hope that the Saturday rally in New York City will not turn to the violence that has marred other recent US demonstrations over concerns of racial profiling and police impunity, a NYPD spokesperson told Sputnik on Friday.

"Well, obviously we would like a safe and peaceful city, but I really can't get into details about how we will police the protest," police spokesperson Detective Martin Speechley said. "There will be an adequate detail to cover the event and we hope it's going to go off without any incidents and that the protesters protest peacefully."

Demonstrators will gather in New York’s Washington Square Park at 2 p.m. local time (19:00 GMT) on Saturday — the latest in a wave of discontent over grand jury's decisions to not prosecute the white police officers who killed unarmed black men Michael Brown and Eric Garner earlier this year.

© REUTERS / Adrees Latif
NYC to Stage Protest Against Police Killings of Black Men
Kate McNeely, an organizer of the so-called Day of Rage rally, said in a Friday statement protesters were going to disrupt businesses and shut the city "for justice". Organizers called on people in other cities across the United States to join the struggle.

Protests are being staged "for all those killed by racist killer cops", and organizers demand an end to racial profiling by police, and the creation of an independent prosecutor to handle "police misconduct and excessive use of force".

Arrested Protesters in NYC Sang as They Boarded Police Bus