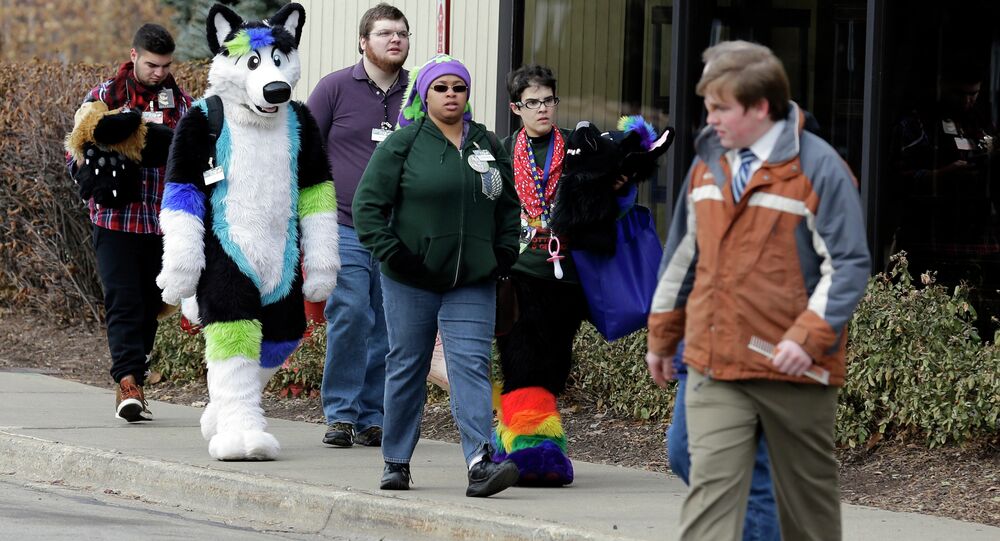 Guests of a hotel in Illinois were evacuated after chlorine gas was detected.

MOSCOW, December 8 (Sputnik) – a Chicago hotel was evacuated in the early hours of Sunday due to chlorine gas poisoning, forcing hotel guests onto the street outside, including visitors to a furry animal convention wearing an array of furry costumes.

"At around 12:45 AM on Sunday, December 7, the Hyatt Regency O’Hare received a complaint of a chemical odor on the ninth floor," said a statement from the convention's organizers, released on Sunday. "First responders determined that a container with a chlorine-containing chemical was broken there. At 1:10 AM the entire hotel was evacuated," the statement continued.

According to the AP, 19 people were taken to hospital complaining of nausea and dizziness, and at least 18 were released shortly thereafter. Investigators told the press they believe the gas was released intentionally and are conducting a criminal investigation. At 4.21am guests were given the all-clear to return to the hotel.

In their statement, organizers of the Midwest Furfest said that the event would go on despite the incident: "The convention will be running on a full normal programming schedule today. We ask you to continue to be patient, and remember that the volunteers who make Midwest FurFest happen intend to give 110% to make sure that the fun, friendship, and good times of Midwest FurFest 2014 overshadow last night’s unfortunate incident."

Russian Adoptee Sets Record With Chicago Marathon Wheelchair Win
The convention is for fans of furry animals to engage in art, literature and performance based around animals with human characteristics. The AP reports that many of the attendees wear cartoonish animal outfits, referring to themselves as "furries." One participator, dressed as a fox, told the AP, "Everyone is from a different background," adding, "Nobody judges anybody. It's nice to come to a place like that."

The Midwest Furfest claims to be the second largest furry convention in the world, and attracted 3,904 attendees to its 2013 event. It has raised over $200,000 for various wildlife- and animal-related charities since its inception in 2000 as an offshoot of Duckon, a science fiction convention.