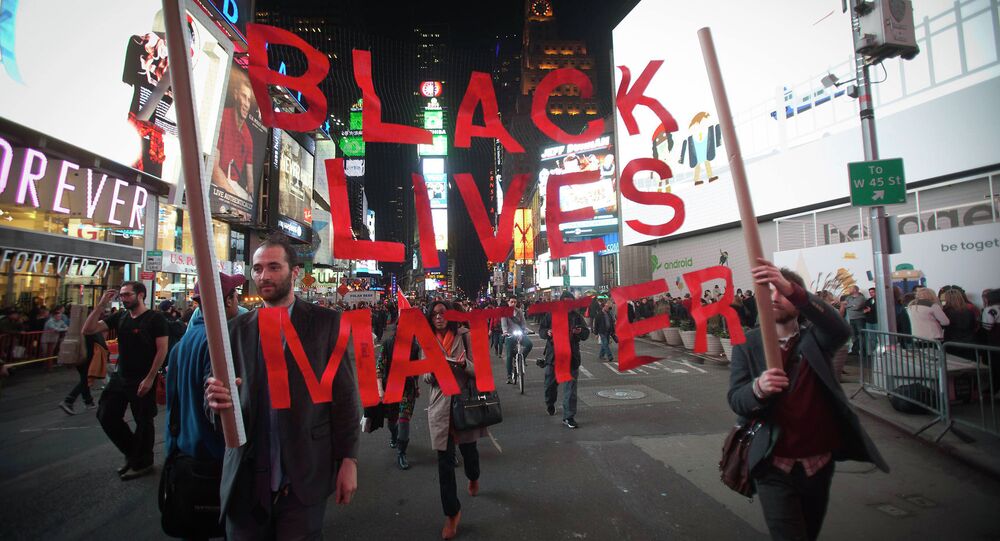 MOSCOW, November 26 (Sputnik) — White people were told by organizers to not appropriate a recent vigil for Michael Brown and Ferguson in Canada, sparking intense debate on social media.

© Fotobank.ru/Getty Images / Chip Somodevilla
Hundreds of Ferguson Protesters March in DC, Call for Social Justice
Bilan Arte, one of organizers of a pro-Ferguson event in Ottawa, thanked white supporters for solidarity but asked them to “refrain from taking up space in all ways possible … and speaking to the media.” In a post, published on the Facebook page of the Ottawa vigil, she stressed that fair-skinned people “are there in support of black folks, so should never be at the centre of anything,” adding that “black voices are crucial” to the movement at the moment.

The same suggestion was posted on the Facebook page of a similar event in Toronto.

Arte’s post attracted nearly 300 comments, prompting one user, Hamdi Loukoum, to ask: “Wow, is this an anti-racist rally or a pro-segregation one?”
In response to the appeal Darian Parsons, stated: “I'm not sure why white people would have to refrain from taking up space…. won't that push them away from coming to support and won't it help to have support from the whole world, not just the black community…? I think it would be a terrible idea to ask non-black people to not talk to the media.”

© REUTERS / Handout via Reuters
Officer Wilson Says He Did His Job Right in Ferguson Shooting: Reports
Other participants were sympathetic with Arte’s message. “For us, it’s really important to come up and show our solidarity and make sure black voices are leading this — that their feelings and opinions are front and centre for everything happening here. We’re just here to show support and be allies,” Paige Jackson and Rebecca Macintyre, both white, told CBC News. “It's not about us. It's about showing solidarity with people whose lives are affected by Ferguson — and that's not really us. That's not really white people,” Macintyre added.

The peaceful rallies were held in Ottawa and Toronto under the banner “BlackLivesMatter” following a night of rioting in Ferguson, sparked by the grand jury’s decision not to indict Darren Wilson, a white police officer who fatally shot the African-American teenager. Thousands have reportedly participated in the two vigils braving cold weather.

© REUTERS / Stephen Lam
Rhode Island Could Be Next Ferguson: Civil Rights Group
“Those folks who are here tonight don't believe that's OK,” said Lena Peters, the leader of the protests, as quoted by the Huffington Post. “We believe that it is part of a larger system that doesn't value black life,” she added during the rally held outside the US Consulate in Toronto.

“Our message is that black lives matter,” said Janaya Khan, one of the organizers of the Toronto vigil, as quoted by the Global News. “Our message is that we unequivocally stand against the no indictment ruled in favour of Darren Wilson and that we completely support Mike Brown and Mike Brown’s family. We support any kind of actions against state sanctioned violence and police brutality and we want to draw parallels to what is happening here in Canada to black and African peoples.”

© REUTERS / Larry Downing
Obama: Ferguson Protests Testify to Broader Internal Problems in the US
The grand jury’s decision came after nearly three months of deliberation over a case that has highlighted issues of race and police brutality throughout the United States, inciting massive protests around the country over the summer.

Thirty-eight US states, Washington DC and over 140 other US cities have organized demonstrations throughout the day on Tuesday under the banner of “Emergency Response Protests to Ferguson Grand Jury Decision”.

Ferguson Violence to Continue Across US: Scholar