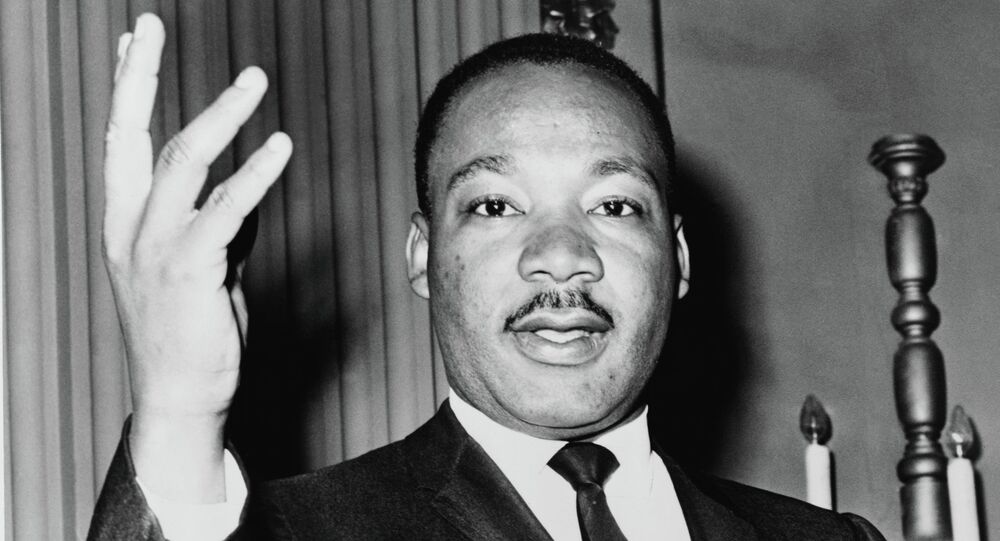 Hate mail sent by the FBI to Martin Luther King detailing King's extramarital love affairs and urging the iconic American public figure to commit suicide has been unearthed by a Yale historian.

MOSCOW, November 13 (Sputnik), Ekaterina Blinova – A full uncensored version of the letter, in which an unnamed respondent, who was later revealed to be an FBI deputy, accused Martin Luther King of abnormal sexual behavior and urged him to commit suicide has been recently unveiled by a Yale professor.

The word "evil" makes six appearances in the text, beginning with an accusation: "You are a colossal fraud and an evil, vicious one at that." In the paragraphs that follow, the recipient’s alleged lovers get the worst of it. They are described as "filthy dirty evil companions" and "evil playmates," all engaged in "dirt, filth, evil and moronic talk." The effect is at once grotesque and hypnotic, an obsessive’s account of carnal rage and personal betrayal," narrates Beverly Gage, a professor of American history at Yale, in her article "What an Uncensored Letter to M.L.K. Reveals," published by the New York Times.

The letter, full of mistakes and typos made deliberately by an FBI operative who posed as a "disillusioned civil rights activist," was sent to King in 1964, a few days before the prominent American public leader received his Nobel Peace Prize.

The FBI began hounding Martin Luther King in 1961 over his ties with  Communist Party member Stanley Levison, who served as King's ghostwriter and fund-raiser. Notably, in the same period, King started attacking the FBI's practices in the South of the US, "accusing Hoover [J. Edgar Hoover, the FBI's Director] of failing to enforce civil rights law and of indulging the racist practices of Southern policemen," notes Professor Gage. The conflict predictably triggered further tension between the bureau and the civil rights leader.

The Washington Post cites William Sullivan, head of the FBI’s domestic intelligence division, involved in the King surveillance program, who wrote in 1963: "We must mark him [Martin Luther King] now, if we have not done so before, as the most dangerous Negro of the future in this Nation from the standpoint of communism, the Negro and national security."

The FBI planted wiretaps and bugs in King's home, offices and hotel rooms. However, instead of King's alleged political conspiracy with communists, the Feds learnt more about the extramarital sex life of the public figure.

Beverly Gage notes that Hoover and his team "seem to have been genuinely shocked" by King's love affairs. The professor cites Hoover's memo, where he denounced the minister and "the leader of a moral movement," as "a tom cat with obsessive degenerate sexual urges." The Feds decided to grasp the chance to attack Martin Luther King through an anonymous letter, which contained a lurid description of his sex life.

Once Martin Luther King had looked through the message, he and his confidants "immediately agreed the letter could only be the work of one institution: Hoover's FBI," the professor points out.

Beverly Gage raises a burning question: to what extent the government can meddle in a civilian’s private life. "Should intelligence agencies be able to sweep our email, read our texts, track our phone calls, locate us by GPS?" The example of Martin Luther King's case has shown that instead of serving national security, some senior intelligence operatives will use sensitive private data in order to carry out "personal and political vendettas," the author states.