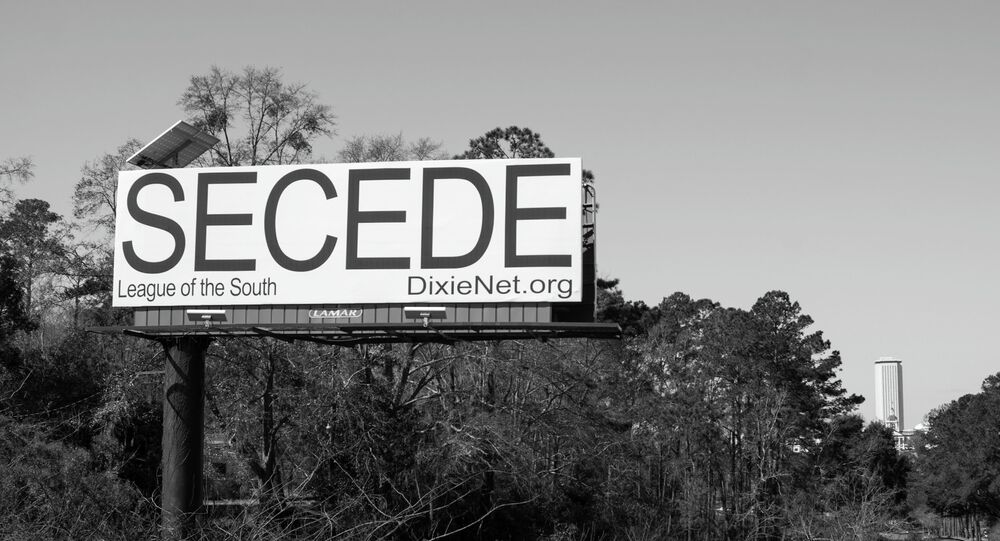 S. Florida to Tallahassee: So Long… and Thanks for All the Fish!

The south coast of Florida is seeing a gradual extinction from rising tides. Facing the danger of falling into the sea and their own potential Fukushima, the city of South Miami passed a resolution to secede from Florida and create America’s 51st state.

South Miami Vice Mayor Walter Harris who proposed the resolution says climate change is the issue that is breaking the levees back. He dismissed criticisms that he is “crazy” saying desperate times call for desperate measures.

“Which is more radical?” he asked Sputnik in a phone interview. “Partitioning the state of Florida or the devastation global warming is bringing?”

Adding to the sense of desperation, Harris points to the Turkey Point nuclear power station with its 42-year old nuclear reactors that risk becoming submerged. The danger is emphasized in a petition submitted to the Nuclear Regulatory Commission in which a former Turkey Point engineer expresses concern for “a nuclear accident similar to the ongoing Fukushima nuclear accident in Japan.”

“All it will take is one good storm to wreak havoc,” Harris said. “There are no escape routes. You’re not going to get out of South Florida if something happens.”

The proposal divides Florida almost down a horizontal middle with the separating line just above Orlando. The resolution gets quite specific, noting the new state of “South Florida would be comprised of 39% of the area of the current state of Florida and would have a population of approximately 13,375,000 people which is 67% of the total population of the current state of Florida.”

There has long been a north-south divide in Florida with the capital nestled within a mostly rural and conservative north panhandle and the urban metropolises of Miami, Tampa, and Fort Lauderdale sitting in the southern half of the state. South Florida residents often complain that they pay into the state budget disproportionately compared to what they get back.

The logistics are daunting and the process would require Congress to sign off on a 51st state. Harris is not fazed.

Asked about whether the country would have to add two senators, Harris responds, “There are worse things that could happen.”

What about adding a new star to the American flag?  “I would place smart money investing in flag companies.”

Few — except perhaps newly-re-elected Florida Governor Rick Scott — question the dire situation Florida is in. Some estimates put the sea rising up to six feet in the coming decades — South Florida is only five feet above sea level now. A local  study calculates a rise of two feet by 2060 which will cause flooding all over southeastern Florida. Another national study points out that Miami sits atop a porous limestone base, meaning attempts to stop sea encroachment with levees won’t work as the water rises from directly below.

Despite all this, Governor Scott refused to concede he even believes in climate change, saying “I’m not a scientist.” (Apparently, the analysis of 97 percent of climate scientists was also insufficient.)

© AP Photo / Amy E. Conn
This Sept 14, 1999 file photo shows Fort Lauderdale, Fla., residents Rafael Verga, left, and Joel Vasconcelos, right, holding on as waves hit the jetty at Haulover Beach in Miami Beach, Fla., as Hurricane Floyd moves toward South Florida. Sea levels rising because of global warming, along with increased storminess as the climate changes, will expose tens of millions of people in the world's port cities to coastal flooding, says a report by the Organization for Economic Cooperation and Development.
That was enough for Harris, and the idea of bolting from the governor’s rule was born.

“The governor isn’t even sure about it,” he said. “This is an unequivocal reality and it’s happening much faster than we anticipated just a few years ago. Now is the time we must do something.”

Harris hadn’t expected the response he got, but now officials in other communities are writing to him saying it’s an “excellent idea” — including someone from the panhandle town of Marianna just south of the Georgia border.

Indeed the plan has gone viral around Florida.

“I’m glad it did,” Harris said. “Someone had to be the first and now we’re getting a lot of support from around the state.”

While the governor’s press office did not respond to a request for comment in time for publication, Sputnik did reach out to South Miami Commissioner Gabriel Edmond who voted against the resolution.

“From a practical standpoint it’s just not realistic,” he told Sputnik. Past successful attempts at partition “involved serious war situations which are not relevant in this case.”

The last state partition was the dividing of Virginia and West Virginia during the U.S. Civil War.

However, Edmond is quick to note he fully believes in the danger of global warming.

“Climate change is a grave threat and South Florida is really at ground zero,” he said. “This is just not the best way to solve that problem.”

Edmond did add that the resolution has promoted awareness saying, “If people are discussing climate change, that’s a good thing.”

Harris, however, is not letting up and is organizing a committee to come up with the next steps to make the unprecedented attempt a reality.

He doesn’t just blame Repubican Rick Scott and noted he had tried to discuss the issues with Democrat and Former Governor Charlie Crist, who just unsuccessfully challenged Scott in the midterms. For Harris, it’s more than partisan politics.

“Tallahassee is run by lobbyists,” he said.

2014: A Year of Secession - Venice, Scotland, Crimea, Catalonia and… Miami?