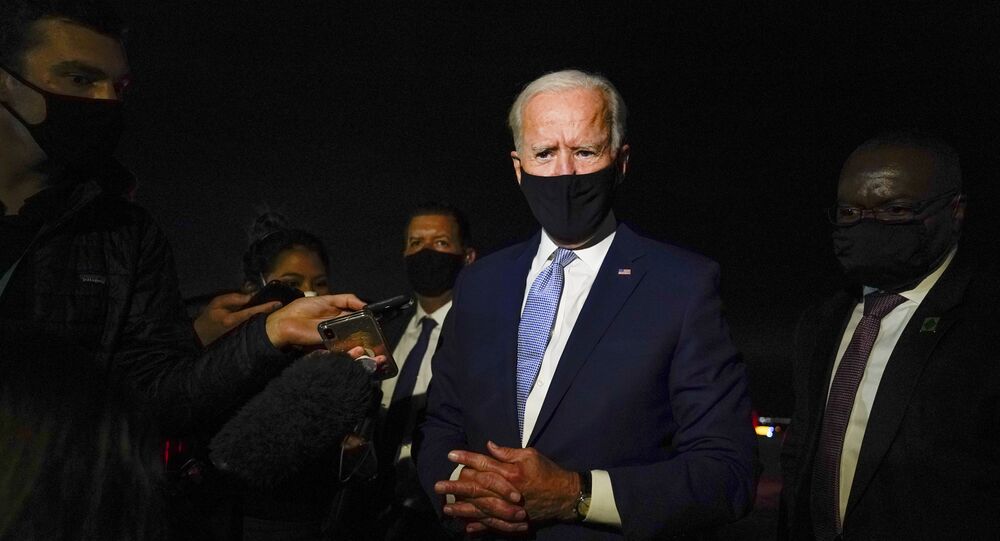 This week, incumbent President Donald Trump took part in an ABC news Q&A event to meet with ordinary American voters. Joe Biden had to go through a similar “interrogation” on Thursday hosted by CNN, but critics say the vibe at his session was a little bit different.

Democratic presidential candidate Joe Biden nearly lost his temper several times during a Question and Answer event hosted by CNN at Pennsylvania town hall, according to the New Zealand Herald, as the former vice-president moved to answer a stream of questions about the coronavirus pandemic, the healthcare system and minimum wages.

Most of his answers involved references to his Republican rival Donald Trump (regardless of the question). But the grilling from the crowd, which was chosen by CNN and included many Democrats, was still defined as “less hostile” compared with what Donald Trump faced just a few days before.

Just to compare, the president’s audience, selected by ABC news, was comprised only of undecided voters.

Viewers now suggest that Biden has received a much easier treatment from host Anderson Cooper and “softball” or even “pre-approved” questions from CNN.

Some of them he used to roast his presidential opponent as harshly as possible - including one asking whether he would make it mandatory for school pupils to get anti-COVID vaccine, the one promised by Trump, in order to get back to classes.

"I don't trust the President on vaccines. I trust Dr [Anthony] Fauci. If Fauci says a vaccine is safe, I would take the vaccine. We should listen to the scientists, not to the President”, Biden said in response.

Biden wasn’t given any tough questions. 13 out of the 16 voters from the audience who asked him questions were Democrats. Cooper nearly got on his knees to suck Biden’s dick! Rigged!

Meghan, Meghan. You & the nation know Biden responded to scripted softball "questions" from dem supporters. Hardly a test. (p.s. Jimmy Carter, too, was empathetic to struggle and pain but we know how that worked out.)

Despite this Biden got close to lashing out several times.

Asked by one of the Democrat supporters whether he was planning to make healthcare more affordable, Biden deflected from the question to talk about his late son Beau.

"My son died of cancer. He came home from Iraq, and I have to say, it really, really offended me – when he volunteered to go there for a year, and he came home with stage four glioblastoma – and the President referred to guys like my son, [who] won the Bronze Star, as 'losers'. Losers! Talk about losers!" the ex-Obama staffer said as he visibly flared up but then stopped for a few seconds to recover his emotions.

Members of the Trump administration denied Biden's claim that the President had ever said such a thing in relation to dead soldiers – an allegation which first appeared in an article in The Atlantic, which cited unnamed sources.

Joe Biden says he was "really, really offended" when he heard reports that President Trump referred to "guys like my son" as "losers."

Biden's late son, Beau Biden, was awarded the Bronze Star for his service in the Iraq War. https://t.co/QTzyy3zv9U #BidenTownHall pic.twitter.com/KvO2lOX5hy

"I've been doing this a long time. I never, ever thought I would see such a thoroughly, totally irresponsible administration”, the former vice-president said.

V.P. Joe Biden is on CNN, this is T.V. I can watch without my blood pressure skyrocketing. I've seen him lose his temper about 4 times in a half hour! ON the following: Lack of affordable healthcare
Living wages
Cancer
Trump calling military heroes "losers"
Love his dedication

​Meanwhile, President Trump said during his political rally in Wisconsin that Biden has “no enthusiasm” and compared his presidential opponent with a “piece of wood” on the ground.

Both presidential hopefuls are now holding campaign events in Minnesota, the state that has traditionally supported the Democrats.