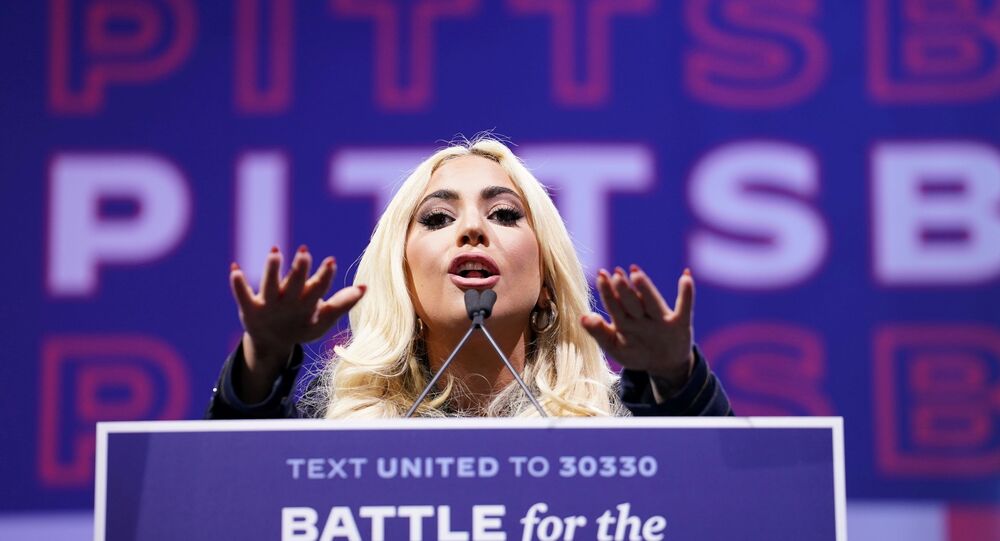 Having criticised the POTUS, Gaga suggested that people should vote for Joe Biden because the latter is a "good person".

Popular American singer and performer Lady Gaga both bashed US President Donald Trump and praised his Democrat presidential opponent Joe Biden as she made an appearance at a campaign event in Pennsylvania shortly before polling stations opened for the election in the US on 3 November.

In her address, Gaga called upon people to "vote like your life depends on it, or vote like your children’s lives depends on it, because they do", then referred to what The Guardian describes as "Donald Trump’s history of crude sexual remarks and alleged sexual assaults".

The singer insisted that no matter how one identifies oneself, one has a chance to "vote against Donald Trump, a man who believes his fame gives him the right to grab one of your daughters, or sisters, or mothers or wives by any part of their bodies", apparently echoing the infamous "grab ’em by the p*ssy" remark attributed to Trump, as the newspaper points out.

Lady Gaga with a simple message to voters in Pittsburgh, Pennsylvania: 'Vote for Joe. He's a good person.' pic.twitter.com/9L1NwuniMI

Lady Gaga's remarks have elicited a somewhat mixed reaction online, as some seemed to approve of her remarks but others didn't seem to agree with her assessment of Biden.

I still cannot believe this even has to be given as a reason or to be said ...

Dump should have been dust 4 years ago, let alone having a chance at another 4 years ...

I mean... doesn’t Biden sniff and grope kids? And didn’t he finger some girl at a party? Trump is a dumpster fire no doubt but Biden isn’t much of an improvement. They’re both just horrendous.

​And there were also those who suggested that voting for a candidate simply because they are a “good person” may not be a particularly brilliant idea.