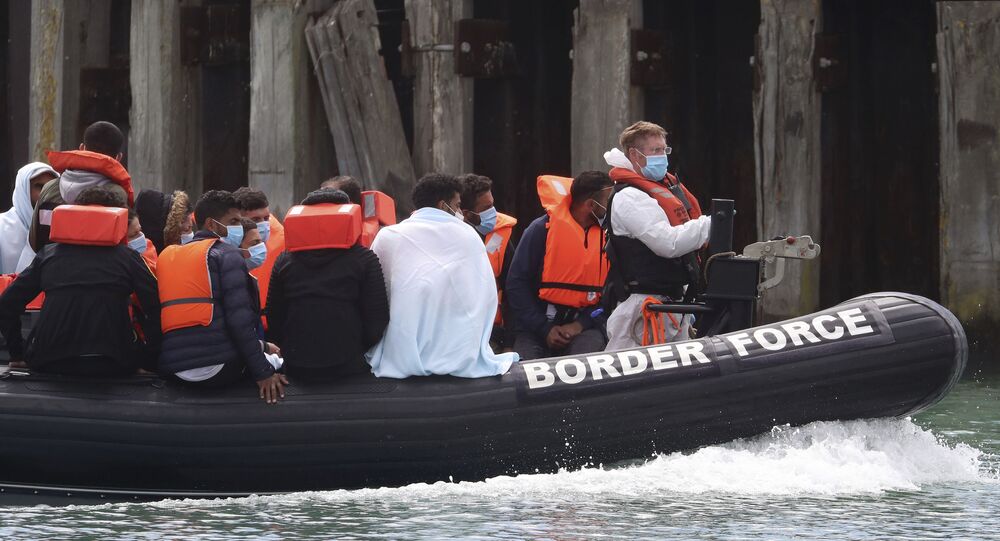 New legal guidance released by the Crown Prosecution Service (CPS) on 6 July says that migrants who steer dinghies across the English Channel with the intention of claiming asylum in port will no longer be prosecuted, unless they are found to have been involved in other criminal activity.

The UK Tory Party has denounced the recent move of the Crown Prosecution Service (CPS) to stop prosecuting asylum seekers steering boats across the Channel illegally, warning that it will only trigger a fresh wave of migrant crossings, writes The Times.

“Refusing to prosecute people smugglers because they were rescued in the Channel by the British state is a new low even for the Crown Prosecution Service,” a Conservative MP was quoted as saying.

Nick Timothy, former immigration policy adviser to then- Home Secretary Theresa May, was cited as saying:

“The CPS has just sent a ‘Come to Britain’ advert to every would-be illegal immigrant in the world, and to the organised crime gangs and people traffickers who facilitate them.”

Another Tory said the CPS should be renamed into the “Clown Prosecution Service”.

Ahead of its decision, taken on 8 July, the CPS had argued that migrants not involved in any criminal activity other than illegal entry should not be prosecuted because they could “usually be better dealt with by removal”.

However, it would appear that the CPS was pressured into taking the decision, as the Joint Council for the Welfare of Immigrants went on Twitter to underscore that they had “threatened to sue the CPS for prosecuting asylum seekers as people smugglers”.

We threatened to sue the CPS for prosecuting asylum seekers as people smugglers.

The CPS must admit they were wrong and urgently review all prosecutions.

As @chaipatel0 says, this guidance does not begin to address the injustice suffered.https://t.co/bQJ7mN6b6q

It also suggested it could still pursue legal action, as the new guidance “does not begin to address the injustice suffered”.

The guidance released by the CPS on Tuesday reads:

“In cases involving the use of a boat where the sole intention is to be intercepted by Border Force at sea and brought into port for asylum claims to be made, no breach of immigration law will take place … the same applies where the intention is to sail the boat to a designated port of entry in order to claim asylum.”

The decision by the CPS is seen as a blow to the plans of the Home Office to crack down on small-boat crossings.

Priti Patel, the home secretary, has been pushing to criminalise Channel crossings and render the route “unviable” in the face of record numbers of migrant arrivals.

Current legislation allows the prosecution of asylum seekers only if they technically “enter” the country, which is hard to establish as a majority are intercepted by Border Force and “escorted” into a designated port.

© AFP 2021 / BEN STANSALL
Waleed (3L), 29, a Kuwaiti migrant, stands with other migrants onboard the DHB Dauntless tug boat as they are brought to shore by the UK Border Force after illegally crossing the English Channel from France on a dinghy on September 11, 2020, in the marina at Dover, on the south coast of England

Priti Patel on Tuesday revealed a proposed new offence in the Nationality and Borders Bill that would apply to those “arriving in the UK without a valid entry clearance”. The offence would carry a penalty of up to four years in jail.

Despite the decision of the CPS, sources close to Patel suggest the minister is determined to press ahead with the new bill.

“In order to deter these deadly crossings, it is vital we are able to take action against those who travel to the country illegally and those who facilitate illegal crossings. By creating a new offence of illegal arrival in the UK... we will make it easier to prosecute small-boat pilots who facilitate these dangerous journeys, regardless of where they are intercepted,” a Home Office spokeswoman was cited as saying.

The numbers of migrants attempting to cross the Channel between Europe and the UK continue to rise.

According to the UK government, this year to date, 3,500 people have successfully crossed the Channel; more than 8,000 arrived by that route in 2020.