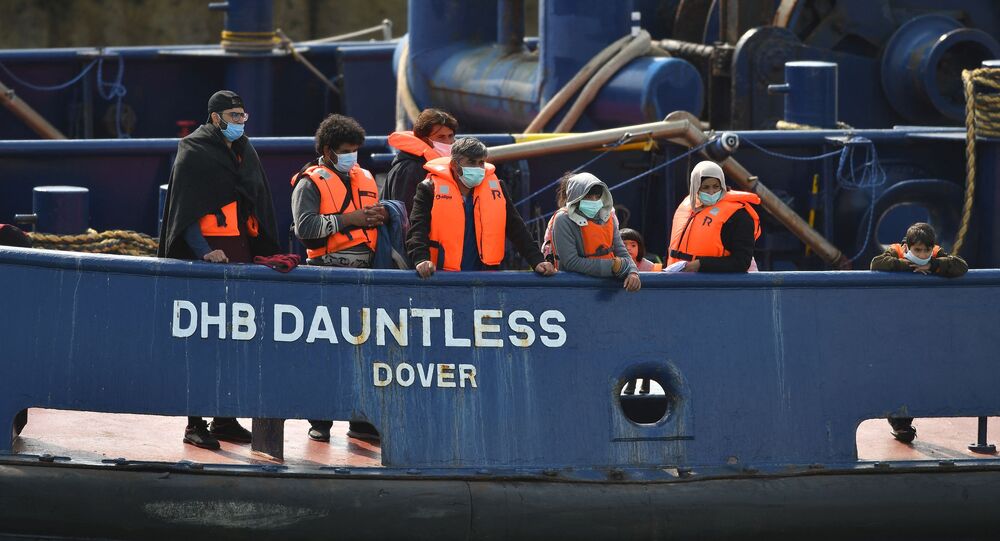 Over the past six months, more than 4,000 people have been prevented from crossing the English Channel and reaching Britain as the UK government tries to resolve illegal migration-related issues.

The UK Home Office has touted new legislation that will pave the way for creating offshore centres for asylum seekers and lodging criminal charges against migrants "knowingly" arriving in Britain without permission.

The Nationality and Borders bill was described as containing "the most radical changes to the broken asylum system in decades", and are expected to make it harder for those who enter the UK illegally to stay in the country. The document is due to be presented in the immediate future.

Home Secretary Priti Patel underscored that it was part of her mission to crack down on criminals involved in people-smuggling across the British Channel and who may face tougher sentencing, up to life imprisonment, under the new law.

"For too long, our broken asylum system has lined the pockets of the vile criminal gangs who cheat the system. This isn't fair to the vulnerable people who need protection or the British public who pay for it. It's time to act", Patel said on Monday.

She called the new legislation a document that "delivers on what the British people have voted for time and time again – for the UK to take full control of its borders".

The home secretary added that the bill "paves the way for a fair but firm system that will break the business model of the gangs that facilitate dangerous and illegal journeys to the UK while speeding up the removal of those with no right to be here".

Briton Have Had Enough of Illegal Migration, Patel Says

The remarks come a few days after Patel focused on the issue in an article published by The Sunday Expess, in which she pointed out that the British people "have simply had enough of illegal migration" and the abuse of the British asylum system.

"The government will address the challenge of illegal migration for the first time in over two decades through comprehensive reform of our asylum system", Patel wrote, pledging that the Nationality and Borders bill will be introduced before the end of next week.

She praised the document as "the change" London needs in order to "fix the UK's broken asylum system".

Enver Solomon, chief executive of the Refugee Council, one of the leading charities working with migrants in the UK, has meanwhile remained downbeat about the new bill's potential effectiveness, accusing the government of "choosing to not only turn away those in need of safety but also treat them as criminals".

"This anti-refugee bill will drive an already inefficient and ineffective system into disarray with even worse delays and far greater expense", Solomon said.

He was echoed by British Red Cross CEO Mike Adamson, who said his organisation is concerned that the support of asylum seekers will depend "on how they entered the country, rather than the dangers they face".

© AP Photo / Gareth Fuller
Illegal Rescue? UK Border Force Secretly Picked Up Channel Migrants in French Waters, Report Says
"As MPs begin to work on the bill, we urge them to remember that behind a term like 'refugee' or 'asylum seeker' is a person who simply wants to live safely, have the chance to rebuild their life, and contribute to communities", Adamson stressed.

Almost 6,000 migrants are estimated to have crossed the English Channel in the first six months of 2021, trying to enter the UK, according to reports.

Last year, at least 8,400 refugees made the crossing into Britain, a drastic increase compared to 2019, when just 1,844 asylum seekers arrived in the country.