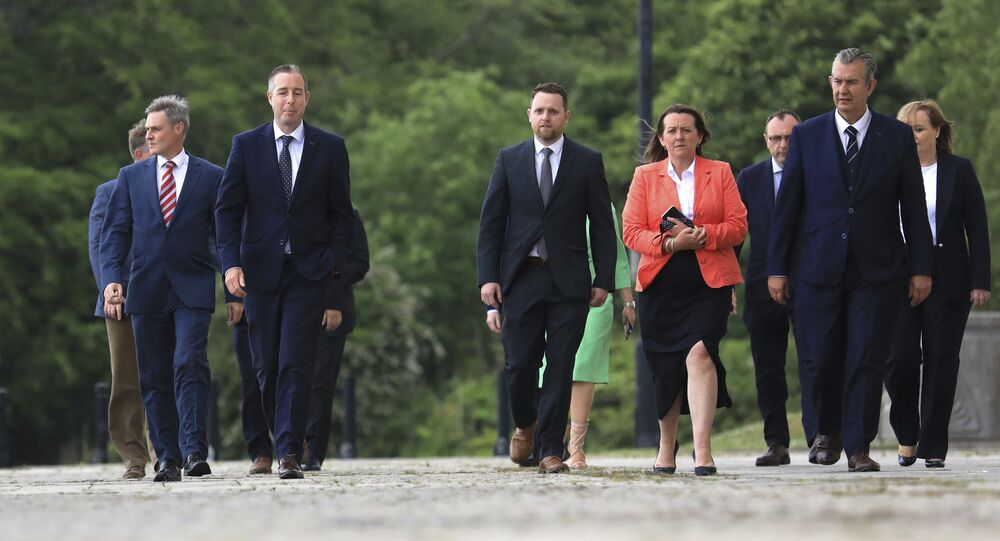 Arlene Foster resigned as leader of the Democratic Unionist Party in April after months of criticism within the party. She has stepped down as Northern Ireland's First Minister and is set to be replaced by Paul Givan.

Boris Johnson’s Northern Ireland Secretary Brandon Lewis has secured the agreement of the DUP and Sinn Fein over who will be the new First Minister and Deputy First Minister.

I am pleased to announce that I have secured commitments from the DUP and Sinn Féin on the nomination of a First Minister and deputy First Minister.
I now expect this to happen at the earliest opportunity - later this morning!

​Arlene Foster resigned on Monday, 14 June, as leader of the DUP and her successor, Edwin Poots, has been trying to resist caving in to Sinn Fein and the British government on the issue of Irish language protection legislation.

The British government had threatened to push through national legislation to protect the Irish language if the DUP did not agree to pass laws at Stormont.

Poots has reacted angrily to the pressure being exerted from London.

He told the BBC he did not welcome the intervention by Mr Lewis and said: "I indicated that the agreement that was made…was something we were committed to and prepared to work through. What I wasn’t prepared to do was have a gun held to my head in terms of the timings of that and SF’s demand that I do that before the June 24."

It remains unclear whether Poots and Givan are in complete agreement about the way forward but their hand appears to have been forced by London.

Sinn Fein, the largest Irish nationalist party and the former political wing of the Provisional IRA, has been demanding special rights for Irish language speakers on a par with legislation for Welsh speakers in Wales.

Sinn Fein leader Mary Lou McDonald said the British government had agreed to introduce such legislation at Westminster after the DUP refused.

.@BrandonLewis says if the Stormont executive hasn’t progressed Irish language legislation by end of September the Govt will take legislation through Westminster - by
Introducing legislation in October

​The British and Irish government are co-guarantors of the 1998 Good Friday Agreement, which ended 30 years of sectarian violence in Northern Ireland and introduced a devolved power-sharing government.

But following the death of Sinn Fein’s Martin McGuinness in 2017 the power-sharing agreeement between the two parties collapsed with Foster and O’Neill unable to reach agreeement on the Irish language issue.