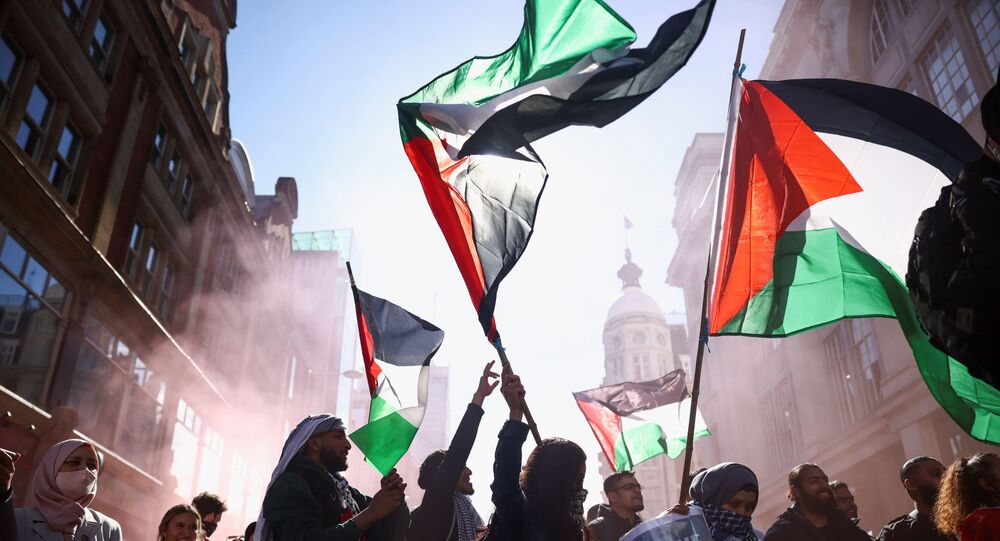 The incident occurred as "anti-Jewish sentiment" in London reportedly witnessed an increase amid the ongoing escalation of the Israeli-Palestinian conflict, which flared earlier this month.

Four men were arrested by the Metropolitan Police in the Britain’s capital after a group of cars adorned with Palestinian flags was spotted driving through north London, with the vehicle’s occupants calling out rape threats against Jewish women, Ynet reports.

The slogans that were chanted by the people in that vehicle "convoy" included "Free Palestine", "F*ck the Jews", "F*ck their mothers" and "Rape their daughters".

The four individuals were arrested on suspicion of racially aggravated public order offences and were taken into police custody, with the media outlet noting that the incident occurred "just before" a Jewish religious festival known as Shavuot, which started on 16 May this year.

​The area where the vehicles were spotted reportedly has a "sizeable Jewish community".

This development also comes amid the escalation of the Israeli-Palestinian conflict, which has seen hundreds of rockets being fired from the Gaza Strip into Israel, while Israeli warplanes and artillery have pounded alleged Hamas targets in the Palestinian enclave.

According to Ynet, there has been an increase in "anti-Jewish sentiment" in London since "the start of the fighting in Gaza", while the aforementioned motorcade incident "sparked fear among members of the British Jewish community", with some members of it even complaining that they became afraid to "walk through the city".