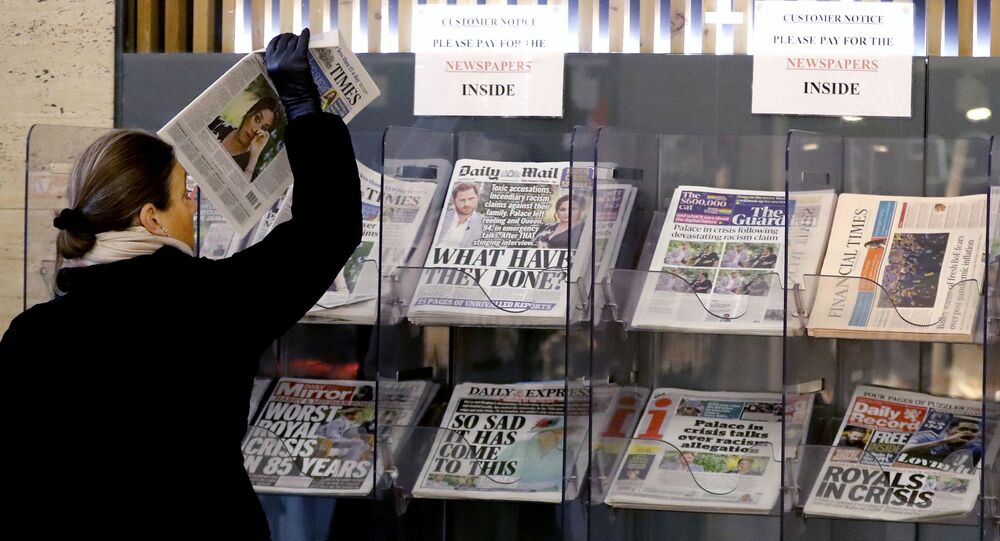 MOSCOW (Sputnik) - Ian Murray, executive director of UK's Society of Editors (SoE), resigned from his position on Wednesday evening after receiving backlash from over 200 industry professionals over claims that there is no racism in UK press as asserted by the Duke and Duchess of Sussex in an interview with Oprah Winfrey.

In response to these claims, the SoE released a statement on 8 March saying that "the UK media is not bigoted and will not be swayed from its vital role holding the rich and powerful to account following the attack on the press by the Duke and Duchess of Sussex."

Murray also stressed in the statement that it was "untrue that sections of the UK press were bigoted" and called the claims made by the duke and duchess "not acceptable ... without providing any supporting evidence."

Some 236 journalists of color from the Guardian, Metro, the New York Times, the BBC signed an open letter expressing their dismay at Murray's response. Editors of top British media, including Financial Times, Guardian and HuffPost UK, released statements clarifying they did not share the position of the SoE and its chief. ITV News presenter Charlene White also declined hosting this year's Press Awards, the largest industry event held by SoE.

"I considered not saying anything about this because I'm aware I won't make myself popular with my peers, but I'm just going to stand up and say it: I don't agree with statement from my industry body that it is 'untrue that sections of UK press were bigoted'," Jess Brammar, HuffPost UK editor-in-chief, tweeted.

In the face of the backlash, Murray made the decision to step down from his position and let the society "rebuild its reputation."

"As executive director I lead the Society and as such must take the blame and so I have decided it is best for the board and membership that I step aside so that the organisation can start to rebuild its reputation," Murray was cited as saying by the official SoE press release.

However, he clarified that in his initial statement he did not intend to defend racism and "not intended to gloss over the fact the media industry in the UK does have work to do on inclusivity and diversity".

Earlier in the week, in a groundbreaking interview with Oprah Winfrey released in the US on Sunday evening, Harry and Meghan shared their experiences as a British royal couple and confessed that a "large part" of why they had left the UK was racism, specifically singling out the bigotry in the UK press.

The UK's Society of Editors represents interests of nearly 400 members, which include editors, editorial directors, editors-in-chief and other professionals from national, regional and local media, media lawyers and academics in journalism education. The organization's goal is to protect the freedom of speech and promote high editorial standards in the press.