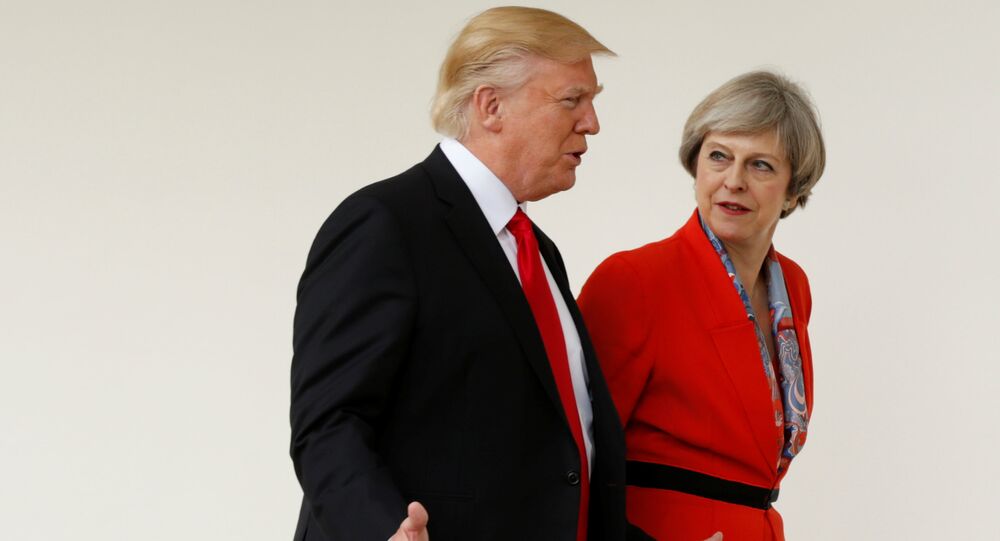 Theresa May Called Her Husband to Say She Was Holding Hands With Donald Trump on DC Trip, Docu Shows

Former US President Donald Trump and Theresa May were spotted holding hands during the prime minister's official visit to the White House in 2017 and his state trip to the United Kingdom in 2018.

Before photos of Theresa May holding hands with Donald Trump circulated worldwide, the former UK Prime Minister made a call to her husband to alert him, aссording to a new documentary released on Sunday.

After becoming the first foreign leader to visit Trump after his election, May embarked on another trip to the White House in 2017 to persuade the then-US president to commit to the North Atlantic Treaty Organisation (NATO) and to talk about his relationship with Russian President Vladimir Putin.

Fiona McLeod Hill, who served as Downing Street's joint chief of staff, told filmmaker Norma Percy – who made the three-part BBC series entitled Trump Takes on the World – that the former president held the PM's "hand going through the colonnades, which took us all by surprise, and as it turns out, took Theresa by surprise."

"She couldn't really take her hand back, so she was stuck... And the first thing she said was ''I need to call Philip just to let him know I've been holding hands with another man before it hits the media''."

However, before she was able to call her husband, she reportedly had to attend a lunch hosted by Trump.

Percy talks to several observers and former advisors to the Trump White House as they dish the dirt.

In the documentary, former US Deputy National Security Adviser KT McFarland claims that Trump did not believe May was a strong leader.

US Undersecretary for Political Affairs Thomas Shannon reveals that May was "given the full bloom" from Trump upon her arrival, which he describes as running "the gamut from his own inauguration to his disdain for the press."

According to the series, after Trump denied having spoken to Putin, his chief of staff informed the president that the Russian leader had called but was not put through.

This reportedly sent the president into a "toe-curling" rant and he "flipped" at his advisors, reprimanding them in front of May, Shannon claims.

"You're telling me that Vladimir Putin called the White House and you're only telling me now during this lunch? Vladimir Putin is the only man in the world who can destroy the United States and I didn't take his call," he allegedly said during the lunch.

May was also seen holding hands with President Trump during his visit to the UK in 2018. Prior to a press conference at the premier's country house at Chequers, he took her hand before walking down the stairs.

​The previous day, she held on to his fingers while walking up the steps of Blenheim Palace to attend the state dinner.

Theresa May told Andrew Marr following the event that she had in fact held his hand to help him up and down stairs.

“What you notice is that whenever he takes me down a slope or stairs – he did it up the steps at Blenheim Palace – he takes my hand to help in going up the steps," she said.

May's repeated hand holding with Trump led to criticism by opposition MPs that she was being too submissive with US leader.