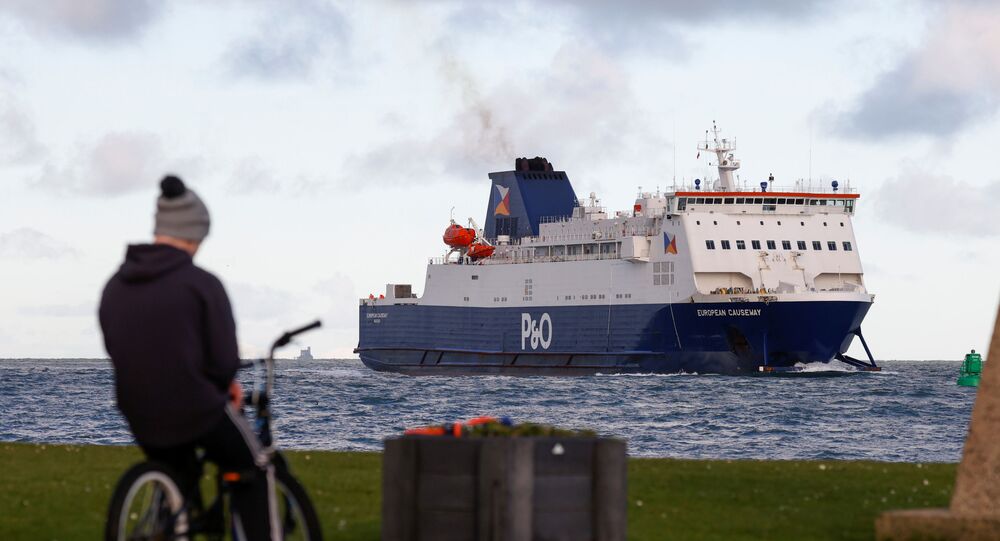 Empty shelves in Northern Ireland's supermarkets have rubbed some salt into old wounds –while Irish politicians are pinning the blame on Brexit, NI Unionists are calling for the abolition of the Northern Ireland Protocol and a clear break from the EU.

Northern Ireland's supermarkets have endured food shortages since the beginning of January, which is being blamed on a whole set of factors. While Ireland's Minister for Foreign Affairs Simon Coveney points the finger at the Brexit deal negotiated by Boris Johnson, Northern Irish Secretary Brandon Lewis insists that coronavirus-related pre-Christmas shutdowns are to blame.

What's the Main Cause for Food Shortages?

"I think that we have to look back at the period immediately before Christmas, when clearly, the new strain was in circulation, and we didn't have any difficulties in that way then," notes Gary McFarlane, director for Northern Ireland at the Chartered Institute of Environmental Health, throwing Lewis' assumption into doubt.

Steve Tomkins, director of Phoenix Organics, is also inclined to blame "a mixture of chronic lack of government foresight and zealotic dogma" for empty shelves rather than the new strain of coronavirus, which disrupted the flow of goods over the UK border before Christmas.

Still, this does not automatically mean that Simon Conevey's conclusions are spot on, argues Ian Paisley Jr, the Democratic Unionist Party (DUP) MP for North Antrim.

"The food supply shortages and the other issues that we're facing are not to do with Brexit, but are actually to do with what's called the Irish protocol, which Mr Coveney and the European Union insisted should be applied to Northern Ireland," he states.

To preserve the spirit of the 1998 accords, Northern Ireland remained in the EU's single market along with Ireland. This specifically means that goods entering Northern Ireland from Great Britain are now required to undergo customs declarations and extra checks, while animals, plants, and many other food products also need health certifications.

"We're now in a period of trying to adjust to that – the checks were always going to have to be needed because goods coming from Great Britain – outside, in other words, the European Union and to Northern Ireland, which, although it is part of the United Kingdom, for the purpose of importation and exportation follows EU processes and rents," explains Gary McFarlane.

However, it also means additional paperwork, delays, and financial losses, argues Steve Tomkins, whose firm is based in Herefordshire and sells more than 10 percent of its goods to Northern Irish customers.

"We have to have a Department for Environment, Food and Rural Affairs (DEFRA) inspection before dispatching," he says. "We have to prepare export declarations. We soon (if DEFRA finds out when) will need to prepare phyto hygiene certificates. We have to dispatch to a dedicated hub to meet transport willing to 'export.' All the above add to the cost of the product to our end customers, some of whom have abandoned the market because they do not want to get involved with UK red tape importing end."

Meanwhile, Northern Irish Unionists have raised the alarm over disruptions caused by the Northern Irish protocol, arguing that it endangers the Good Friday Agreement. While the 1998 deal stipulated that Northern Ireland would remain an integral part of the UK, the protocol is effectively driving a wedge between the two parts of the country, according to DUP MP Jeffrey Donaldson.

"[The protocol] breaches a fundamental element of the Good Friday agreement by increasingly separating Northern Ireland from Great Britain in trading terms – our biggest trading trading market, and that simply doesn't help anyone in Northern Ireland," Donaldson said on BBC Radio in mid-January.

Northern Ireland has gone through very turbulent times and the Good Friday agreement is quite fragile in a post-Brexit era, says Dr. Theofanis Exadaktylos, reader in European politics at the University of Surrey, admitting that the DUP has much less leverage on the government now than it did in 2019.

"The Irish government indeed has an advantage card against Britain," the academic suggests. "The Republic can use the open border for these next few years to exercise further influence on Northern Ireland and draw NI closer creating additional pressures. At the same time this can incite further sentiments of unification that have never died out in the north."

DUP MP Ian Paisley suspects FM Simon Coveney of trying to destroy Northern Ireland's economy in a bid to promote the Republic of Ireland as a model. According to the parliamentarian, "the protocol gives them the leverage to do that."

According to the parliamentarian, the Northern Irish "should be allowed now to set aside the protocol and have the full Brexit that the rest of the United Kingdom is now enjoying."

Prime Minister Boris Johnson suggested earlier that "teething problems" are to be blamed for a lack of agricultural goods from Great Britain in Northern Ireland's supermarkets. However, the British premier has also sent a warning to the EU, promising to invoke Article 16 of the Northern Ireland Protocol, which allows the British government to unilaterally impose safeguards in case serious problems emerge.

"What I can certainly guarantee is that if there are serious problems in... supplying supermarkets in Northern Ireland because of some piece of bureaucracy that's misapplied, then we will simply exercise Article 16 of the protocol," Johnson said on 13 January.