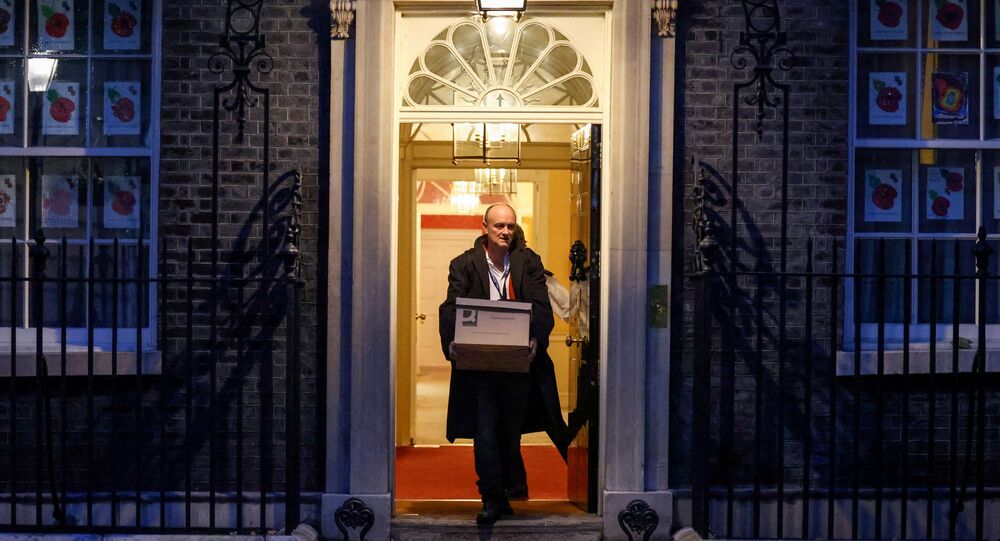 Brexit talks between the UK and the EU are due to head into a critical phase next week, with London hoping to strike a last minute trade deal with Brussels before the transition period expires on December 31.

The European Union is celebrating Boris Johnson’s firing of his chief Brexit architect, Dominic Cummings, as a “make or break moment” in negotiations with the UK on a withdrawal agreement.

Belgian MEP, Guy Verhofstadt, has been leading the EU’s chorus of celebration by lashing out at “unelected bureaucrats” and “unrealistic ideologues,” in a not-so-subtle dig at Mr Cummings.

Mr Verhofstadt Tweeed am image of Mr Cummings leaving No.10 Downing Street with a box of his packed up office items in hand.

“Unrealistic bureaucrats. Unrealistic ideologues… There’s so much irony to the Cummings story. But one thing’s for sure… the legacy called Brexit is damage that unfortunately will not be undone for years,” Mr Verhofstadt opined.

Unelected bureaucrats. Unrealistic ideologues...
There's so much irony to the Cummings story.
But one thing's for sure... the legacy called Brexit is damage that unfortunately will not be undone for years... pic.twitter.com/pIb8fE2Dk3

Yet, Mr Verhofstadt was not the only senior EU official to gloat at Cummings’ shock dismissal by BoJo.

“There are fair questions we are asking. If you want to change in the future, with your background of sovereignty, your subsidies, regulations, then we must have an option an opportunity to react to stop to limit your access to our market,” Mr Weber said.

“I see what is happening now in Downing Street. We can also see this as a quite chaotic situation where we don't have an idea what is really the line in Great Britain. So don't tell us [the EU] we should be ready for compromise. We need a clear idea from Boris Johnson now and I think it's now time for leadership – having all the developments in America in mind where London understood it will be not so easy with Joe Biden to achieve an easy trade deal now … let’s now come to a compromise,” he added.

Mr Cummings, previously one of Johnson’s closest allies on Brexit, has reportedly had increasingly strained relations with the Prime Minister over the past few months. Former Brexit Secretary, David Davis, is reported to have said that Cummings’ relationship with BoJo “fell off a cliff” in recent weeks.

Reportedly, the straw that broke the camel’s back was the discovery by BoJo that Cummings and his pro-Brexit loyalists had been referring to Carrie Symonds, the Prime Minister’s partner, as “Princess Nut Nuts.” Cummings and his allies were said to be growing frustrated with Ms. Symonds, who has allegedly been giving advice to the Prime Minister on Brexit strategy at odds with the staunchly-pro leave bloc, led by Cummings. Broader power struggles were also said to be taking place between those within the government who want a friendlier Brexit more amenable to better relations with the EU, and those who want a clean break, led by Mr. Cummings.

The BBC has reported that Boris Johnson is now ready to “clear the air and move on.”

Mr Cummings’ dismissal by Johnson follows hot on the heels of a resignation last week by Lee Cain, BoJo’s now former Director of Communications, also an ardent Brexiteer and very much seen as part of a no-holds-barred Brexit duo with Cummings.

Some argue that Johnson’s firing of Cummings signifies his intention to take a softer stance toward the EU during the remaining negotiations over a trade deal. There is widespread speculation in Britain that this is possibly being encouraged by the likelihood that Joe Biden, who is seen as pro-EU, will be inaugurated as US president in January and may not grant a favourable trade deal to the UK if it departs the bloc on bad terms.

Boris Johnson may assume a softer Brexit lest he risk crossing Joe Biden, who looks likely to be inaugurated as US president in January, and who is known as being pro-EU.

Leader of the Brexit Party, Nigel Farage, has said that Cummings’ dismissal is a go that a “Brexit sell-out” is on the horizon.