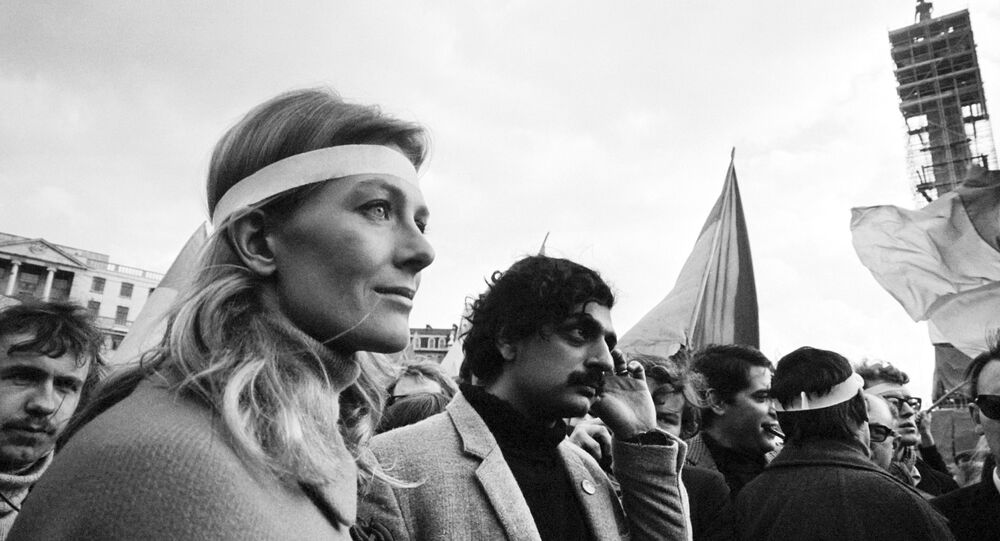 The Undercover Policing Inquiry has begun hearing evidence, after five years of preliminary investigation. The inquiry was set up by Theresa May after it emerged that undercover police officers and MI5 agents had engaged in sexual relationships and deceived innocent people between the 1960s and 1990s.

A journalist and broadcaster who was one of the leading organisers of demonstrations against the Vietnam War in the late 1960s has told the Spycops Inquiry there were never any plans for a “revolution” in Britain.

Tariq Ali, now 77, was on the national committee of the Vietnam Solidarity Campaign (VSC), which organised three protests in London in October 1967, March 1968 and October 1968.

The VSC was one of a number of organisations which were infiltrated by the Metropolitan Police’s Special Demonstration Squad (SDS).

Tariq Ali is not being drawn into the concept that being "a militant group" meant violence, but rather a partisan position. A position that was supported by 25% of the UK population according to the opinion polls of the time. #spycops

​Last week the inquiry, which is being chaired by a retired judge, Sir John Mitting, was told the Metropolitan Police deployed “bearded and unwashed” undercover male officers and “scruffy” female officers to spy on those protesting against the Vietnam War during the 1960s.

Supported 'Socialism With A Human Face'

Mr Ali, who is now a respected writer and broadcaster, said he believed at the time in “socialism with a human face”, as opposed to Soviet-style communism.

He was asked if he expected the demonstrations against the Vietnam War to “precipitate a revolution” in Britain.

"You would have to be slightly deranged to think that the VSC demonstration would trigger off a revolution in Britain…where around 60 to 70 percent of the people supported the Vietnam War at the time," Mr Ali replied.

Pat Jordan told the group that “every single one of my speeches had been noted and tudied by Special Branch”. As someone who had only been in the country for a short time, there was a risk of deportation as well as imprisonment.

​On Wednesday, 11 April, the inquiry was told that a man was convicted of inciting violence after an undercover SDS officer, Sergeant Helen Crampton, got hold of a leaflet at a VSC meeting which called for people to bring “catapults, ballbearings, poles, bricks, Molotov cocktails and home-made grenades” to the October 1968 demonstration.

Mr Ali said: “It’s one thing to write some nonsense like this fellow did, it’s a completely different thing to actually carry it out and surely there is a difference between the two legally as well.”

From Pakistan To Oxford

Mr Ali came to Britain from Pakistan in the early 1960s and studied Philosophy, Politics and Economics at Oxford University. He was elected president of the Oxford Union in 1965 and became a prominent supporter of the Vietnamese communists’ cause.

He told the inquiry the police were shocked when 10,000 people turned up for the first protest against the Vietnam War in 1967 and they struggled to keep them at bay from the “enemy fortress” - the US Embassy in Grosvenor Square in central London.

In the run up to the second protest in March 1968 there was a debate within the VSC about whether Mr Ali, who was still an overseas student at the time, should tell the crowd in Trafalgar Square that they planned to occupy the US Embassy.

He said a lawyer on the committee advised him not to do so because it could see him being convicted of incitement and even deported back to Pakistan, where his views made him deeply unpopular with the military government.

Mr Ali said there were around 120,000 people at the third protest in October 1968, which was considered a success.

But the inquiry heard from a document written at the time which said “the demonstration was within the tolerance threshold of a bourgeois society, for which we were duly applauded by the establishment, though not by many demonstrators.”

Mr Ali was targeted from 1969 onwards by the SDS because of his membership of the International Marxist Group, which was part of the Trotskyite Fourth International.

He said the IMG’s peak membership in Britain was 50,000 but some of the IMG’s branches had only one member, which he described as being "a bit Monty Pythonesque".

​Mr Ali, who was also involved in the Anti-Nazi League, said both groups were  non-violent although the ANL believed black and Asian people should be able to defend themselves from attack from racist gangs.

Stop The War Coalition In 2003

David Barr QC, counsel to the inquiry, also asked him about a document from 2003, which suggested SDS was spying on the Stop The War Coalition, which he co-founded along with left-wing MPs Jeremy Corbyn and George Galloway.

Mr Barr asked if there were similarities with the protests against the Vietnam War in 1968 and if the Stop The War Coalition's march against the invasion of Iraq was a "show of force".

"Yes very much. What could be more forceful than a million people congregating in London to try and stop an illegal, evil war that the government was about to take us into?" replied Mr Ali.

He then said that after the war in Iraq began he visited Damascus and was invited to lunch by the British ambassador who asked him if had called Tony Blair "a war criminal".

Mr Ali said he had and he said he was shocked when the ambassador replied: "I couldn't agree more."

The SDS, which also spied on the Women’s Liberation Movement, Justice for Rhodesia, Save Biafra and the Shrewsbury Two Defence Committee, was disbanded in 2008. Seven years later the Met settled seven claims from women who suffered from the "unacceptable behaviour" of a number of undercover police officers working for the SDS.

Last week, in an opening statement, a former undercover police officer who became a whistleblower, Peter Francis, said "state-sponsored deception" could only be justified in future if its targets truly posed a threat to people and the state.