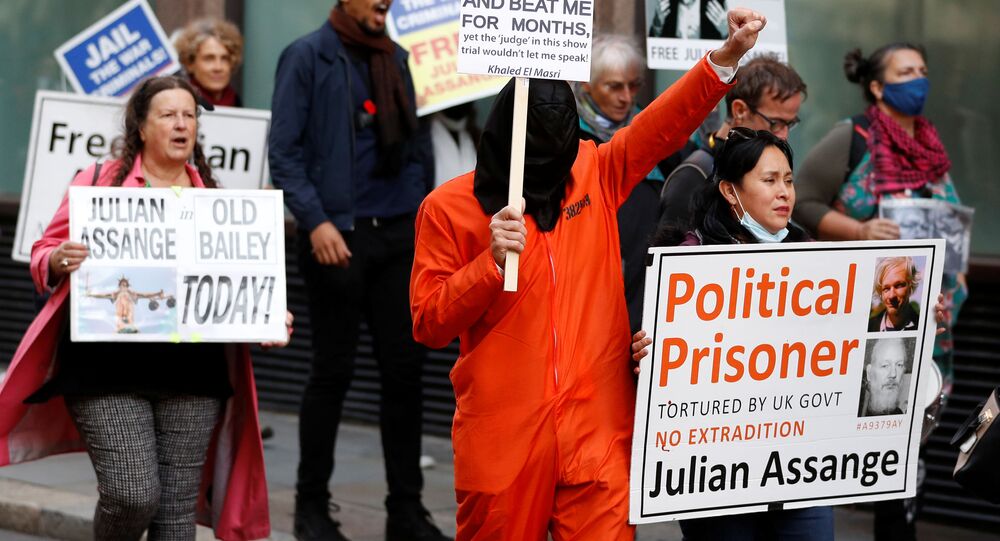 LONDON (Sputnik) – WikiLeaks founder Julian Assange’s father, John Shipton, said that his son, who is subject to an extradition trial in the United Kingdom, is being persecuted, not prosecuted, for revealing US war crimes and diplomatic secrets.

“For us, Julian´s family, this is a persecution, not a prosecution”, Shipton told Sputnik outside the Westminster Magistrates Court, where the first management hearing after the September major trial was held on Thursday.

Mohamed Elmaazi
Assange's Extradition Hearings End With Warnings That 'Journalism is on Trial' From WikiLeaks Chief
During the extradition trial, which resumed on 7 September after six months of delay due to the COVID-19 pandemic and ended on 1 October, Assange´s defence team presented dozens of witnesses in person, via video link or by written testimonies, in an attempt to prove that the whistleblower was being indicted for political reasons.

The court also heard from psychiatrists and mental health experts that Assange is at a high risk of suicide if extradited to the US, where according to witnesses he will be held in solitary confinement and receive limited medical services even before being convicted by the US court.

The defence also produced evidence that the whistleblower was spied on by a Spanish company in charge of the Ecuadorean embassy's security and passed the information on to the US intelligence services.

Before adjourning the court and announcing that her ruling will come on 4 January 2021, the UK judge presiding over the extradition hearing, Vanessa Baraitser, gave Assange´s lawyers four weeks to submit closing arguments, then a further two weeks to the US prosecutors to reply and present their closing arguments, plus another 72 hours for the defence to reply.

© REUTERS / PETER NICHOLLS
WikiLeaks founder Julian Assange's father John Shipton speaks outside the Old Bailey, the Central Criminal Court on the final day of a hearing to decide whether Assange should be extradited to the United States, in London, Britain October 1, 2020.

According to Shipton, at Thursday’s management hearing, which was attended by Assange by videoconference from the Belmarsh prison where he is awaiting the verdict, his legal team asked for another week extension, because he has not been able to read all the submissions.

“The reason for his is that the jail has delayed giving Julian the laptop which has all the submission on it for him to review,” he said.

Asked about his expectation for judge Baraitser’s ruling in January, Assange’s father lowered his voiced and whispered: “Not much.”

As in previous hearings, a group of supporters of the whistleblower gathered on Thursday outside the court building in Central London to protest his detention and eventual extradition to the US.

© REUTERS / PETER NICHOLLS
A protester writes a slogan on a road outside the Old Bailey, the Central Criminal Court on the final day of a hearing to decide whether WikiLeaks founder Julian Assange should be extradited to the United States, in London, Britain October 1, 2020.

“It is extremely important that we stand up for what we think is right, and freedom of the press, freedom of expression are fundamental corners of a democracy”, Assange Defense Committee coordinator Emmy Butlin told Sputnik.

Butlin recalled that the WikiLeaks founder offered the world a lot of information and revealed war crimes, so he deserves support.

The next management hearing is scheduled for 25 November.