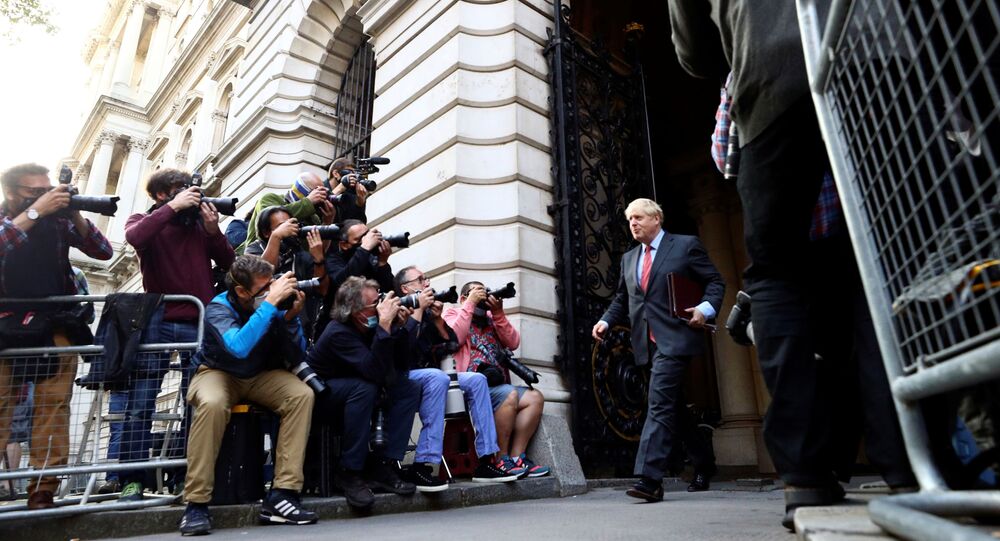 UK Prime Minister Boris Johnson has made a statement on the coronavirus situation in the United Kingdom in the House of Commons.

UK authorities will introduce new restrictions in England, Prime Minister Boris Johnson said during his address to Parliament, adding that this is not a return to total lockdown.

"I want to stress that this is by no means a return to the full lockdown of March. We're not issuing a general instruction to stay at home. We will ensure that schools, colleges and universities stay open because nothing is more important than the education, health and well-being of our young people", the prime minister said.

He also said that schools will be open and restaurants will switch to table service only, while staff in retail and taxis should wear masks, as businesses will be fined for violations.

"We will extend the requirement to wear face coverings to include staff in retail, all users of taxis and private hire vehicles and staff and customers in indoor hospitality, except when seated at the table to eat", Johnson said.

Office workers who can work from home are encouraged to do so, Johnson said.

Johnson assumed that the announced restrictions will be in place for six months. The UK is now better prepared for a second wave of the COVID-19 pandemic, according to the prime minister.

"I must emphasise that if all our actions fail to bring the R (number) below one, then we reserve the right to deploy greater firepower with significantly greater restrictions", Johnson told Parliament.

The daily hospital admissions in England have more than doubled recently, he explained.

UK Labour Party leader Keir Starmer has commented on the matter, saying that the prime minister is right to announce further measures, stressing that his party supports them.

"Farmers across the country will be anxious today. Many [are] already living under local lockdowns. Many more fear that soon they will. They are worried about their jobs, about their loved ones and whether they will be able to spend Christmas with their families. They will also be worried that the government does not have a clear strategy ... This is a time of national crisis and we need clear leadership", Starmer told the UK Parliament.

However, he emphasised that the UK government does not have a clear strategy, noting that all these measures could have been avoided if the government had fixed the testing and tracing capacity months ago.

"Withdrawing the furlough scheme in one fell swoop would be a disaster, and actually at complete odds with the measures he's just announced for possibly up to six months", Starmer said.

The UK’s Chief Medical Officer Chris Whitty and Chief Scientific Adviser Patrick Vallance have warned that the country could face a daily increase of up to 50,000 cases and 200 deaths by mid-October if the government's response remains as it is. They said the number of cases in the UK was currently doubling every seven days.

Prior to this, The Guardian reported that starting from 28 September, people in England will be required to self-isolate if they test positive for COVID-19 or if they have come into contact with an infected person. Violators will face fines of between £1,000 and £10,000, the report said.

Situation is Better But There is Risk of Pressure on Health Service, Large Number of Preventable Deaths, Prof Says

Alex de Ruyter, a professor at Birmingham City University, has shared his views on the impact of COVID-19 on Brexit and the economy.

According to the professor, the effectiveness of the measures will depend both on what specific policies are put in place and how effectively they are implemented and adhered to by the public.

The situation is markedly better than at this point prior to the first lockdown. At that point, the UK was only finding a tiny proportion of the total cases: there was a large number that simply was not picked up, he said.

"The number of cases is also increasing much more slowly than during mid-late March. People are social distancing by default and many workplaces have put in measures to minimise the risk of transmission, with a large proportion of the workforce continuing to work from home. However, we do have a problem on our hands: there is a serious risk of major pressure being put on the health service and a large number of preventable deaths (or long-term complications)", he added.

The biggest single challenge relates to individuals failing to self-isolate. Whilst there are certainly cases of individuals attending social events, the bigger problem is likely to relate to employment practices and childcare, he noted.

Harsh measures against individuals will only work if guidance is crystal clear, consistent from all quarters, and employers (or a precarious financial situation) do not pressure individuals into work when they must remain at home, according to the professor.

The second biggest challenge is the "tracing" element of the "test and trace" system. At present, it isn’t good enough. Finally, there needs to be both a greater testing capacity and more effective use of this, he concluded.

Government Trying to Avoid Second Lockdown Like the One in March, Researcher Says

Chris Stafford, a doctoral researcher at the University of Nottingham in the Politics and International Relations Department, has shared his views on a possible second lockdown in the UK.

“I think the government is going to try to avoid another lockdown like the one they enacted in March. This would be very bad for the economy and would also likely make the government look bad, having failed to manage the virus effectively. (Although they already look quite bad as it is)”, he said.

“Many people believe the 10 p.m. closing of bars and pubs is pointless, but I would argue that it is perhaps a worthwhile attempt at a ‘middle ground’. Things can’t go back to how they were prior to the pandemic, but closing them completely is also undesirable. I’m sceptical as to whether it will have a notable benefit, but it is worth a try”, he added.

According to the researcher, people are confused due to the mixed messages and government U-turns on policy. Recently, they were encouraged to go out to pubs and restaurants, made to feel “lazy” if they didn’t stop working from home, and criticised for not sending their children back to school. Now a second wave is on the horizon and they are being told they should “stay home” again and are even being criticised by some commentators for doing what they were encouraged to do (eating out, returning to the office and such).

Over the past two weeks, the government has faced criticism over failings in the country’s Test and Trace service, which has been fraught with delays. Individuals have also reportedly been instructed to travel hundreds of miles in order to receive a COVID-19 test.

According to government data, the number of patients who have died in London hospitals after testing positive for COVID-19 stands at over 6,100.

The total UK coronavirus death toll stands at over 41,780. On 19 September, the UK reported more than 4,400 new cases - the highest daily total since the start of May.