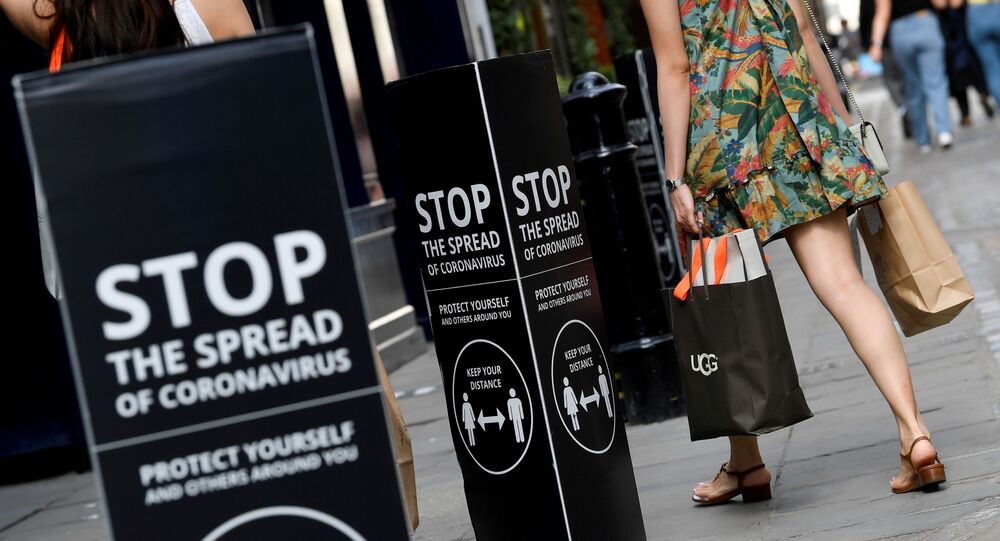 UK Covid Response: ‘People Are Starting to See What a Farce This Lockdown Has Been!’, Analyst Says

Could we be on course for a second lockdown? According to the Government's leading scientist, Patrick Valance, the UK faces 50,000 new Covid cases a day by mid-October if the current infection rate is not halted. But just how can this be stopped? What measures are the government considering to slow the spread of infection?

Michael Swadling of the Croydon Constitutionalists shares his views on the UK's Coronavirus response and what comes next in the fight against Covid-19.

Sputnik: How do you rate the UK’s Coronavirus Response so far?

Michael Swadling: I think the UK has followed the global trend in terms of controlling the Coronavirus. There's not really any evidence that any countries particularly have been able to control it, or that any action any countries has done had a great impact on the control of it. The virus has gone through your population, it's what viruses do. I'm yet to see any particular evidence that what we've done has made a big difference, with possibly one exception, which was the terrible judgement call. And I don't doubt it was done in the best interest of the hospitals, but to send so many elderly patients back to care homes early in the lockdown.

We've seen this as a problem that was repeated in New York and Sweden. They sent patients out into care homes and that seems to have added to a number of deaths among the elderly in care homes particularly. I'm not like there's a view that we can act or make a difference to what this virus is doing to us. I think very little evidence that that's the case from frankly, any country in the world.

Sputnik: No, what do you think is next for the UK is Coronavirus response?

Because the entire focus seems to be on COVID not the plethora of things that people die of and need health treatment for normally, the government's completely taken their eye off the ball for what's in the national good! We'll see what's in that good from a public health perspective, what's in the good from an economic perspective, and they focus everything on this one virus. It's bad, it has been badly shared, no doubt about it. But it's had a big impact on the country already. It seems the numbers have come down not particularly affected by anything we've done.

But the curve hasn't changed when we introduce marks or indeed, when we opened up pubs and it's just carried on and the government unfortunately feels poised to think that they can make one more change and do something I don't know why they think that I see no evidence of that. It they feel to me like the the communist dictators of the old Eastern Bloc.

Who thought if they put one more target on tractor numbered in a factory or tank numbers. Suddenly the economy will come good. It didn't, they collapse. The government at the moment seems to think they can make one more change and change what's going on with this virus. Again, it's not happened so far is that they seem to feel that they've got a magic wand that will make things better and all they've done so far has made things worse.

Sputnik: You think the general public can be expected to go back to a full lockdown again?

Michael Swadling: I think it's interesting. I've been sceptical of the lockdown since before it came. I don't think it's the job of the government to tell us how to live our lives. I think they need to inform us. I can understand the first lockdown, we didn't know quite what was coming. They thought the NHS might be overwhelmed. It wasn't. We built the nightingale hospitals they were barely used, they've now been mothballed. The first three weeks was one thing, the next months of it have been ridiculous.

© REUTERS / Toby Melville
UK Health Minister Tells Public to Follow COVID-19 Rules or Face National Lockdown
Although it has been popular, you have to say the public have generally followed it. The public has generally taken the advice they've been given. I'm sensing a change in that we're seeing Nigel Farage this weekend has come out talking against another lockdown. There's more journalists talking against another lockdown, commentators and media types coming out, just generally showing more and more scepticism and they're doing this not because of deaths going up, because the deaths aren't going up. They've changed the narrative from protecting the NHS to deaths, changed it from deaths to cases.

Turns out something like half the cases are false positives. Do these numbers mean anything? I think the scepticism of the public is now starting to buy in.

I don't see it really being followed. I think there is something frankly ludicrous that if I get on the bus I have to put on a mask. If I go to a pub I can take the mask off. If I go into a shop I need the mask back on. If I go to a sports event, I can be there with 30 people but if I'm with three friends and I see another four friends in the street we can't possibly do that, because the Covid marshals will be out to get us. People are starting to see what an absolute farce this has been. I fear they won't, the government will try to impose more but I hope that people have the good sense to just get back to normal and ignore these people that want to control us.