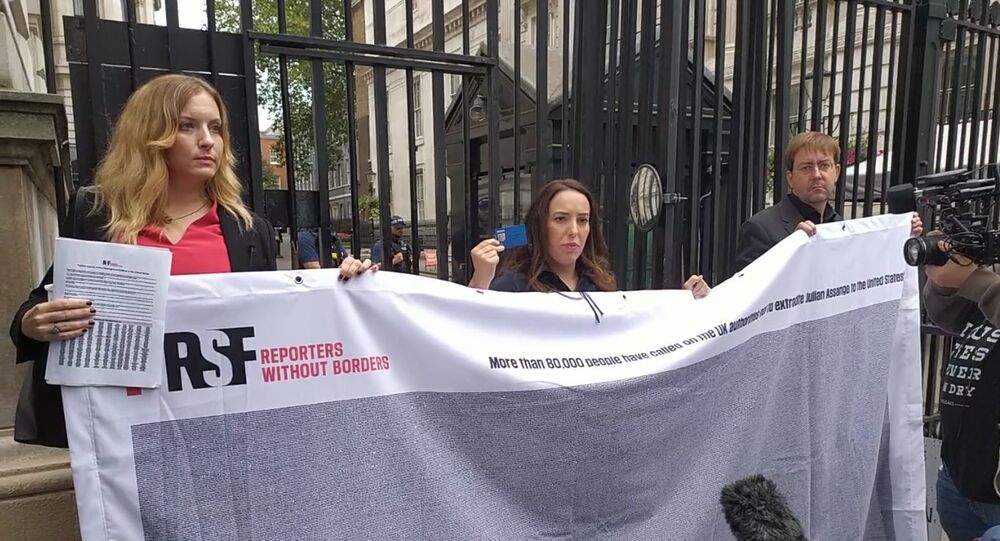 WikiLeaks publisher Julian Assange faces 175 years in prison on charges relating to his role in publishing classified documents which revealed war crimes and other criminality perpetrated by US-led forces in Iraq, Afghanistand and Guantanamo Bay, Cuba.

Rebecca Vincent of Reporters Without Borders and Stella Moris, Julian Assange's partner, attempted unsuccessfully to hand a petition to Number 10 on the morning of 7 September 2020, the date the WikiLeaks publisher's extradition hearings restarted. The document, which calls for an end to the prosecution and extradition proceedings against Mr Assange, has been signed by over 80,000 people thus far, according to Ms Vincent.

.@Rebecca_Vincent of Reporters Without Borders
and @StellaMoris1 prepare to hand a petition to the Prime Minister's residence at Number 10 which calls for an end to the prosecution of WkkiLeaks publisher #JulianAssange. https://t.co/Jb8hIh1SgC pic.twitter.com/2vKK7RmzuZ

"We were told that the orders come from Number 10 directly that no petitions will currently be received. Which means that in our democracy the British public currently cannot officially handover any petition to our government", Ms Vincent told Sputnik.

​Ms Moris also told reporters that Mr Assange, whom she spoke to on Sunday "was not well" and that he will have already been awake for five hours by the time he is brought to the Old Bailey each day.

.@StellaMoris1 says she spoke to #JulianAssange yesterday and that he was "not well". He is woken up at 5am, handcuffed, strip-searched and by the time he arrives in court 5 hours will have passed, the same on the way back to prison, she says.#AssangeHearing Pt 2 Day 1 pic.twitter.com/qM57fL1MD7

​Ms Moris, launched a fundraiser to help with mounting legal costs which have surpassed £500,000, according to her Crowdfunder.

Mr Assange, remains incarcerated in the Belmarsh maximum-security prison on pre-trial detention, despite completing his sentence for absconding while on bail when he sought and obtained asylum at the Ecuadorian embassy. He faces up to 175 years in prison if he is convicted on all 18 charges levied against him. His extradition hearings will run for at least three weeks and possibly a fourth during which time most journalists, if accredited and approved by the Ministry of Justice, will have to follow the proceedings remotely via video link.