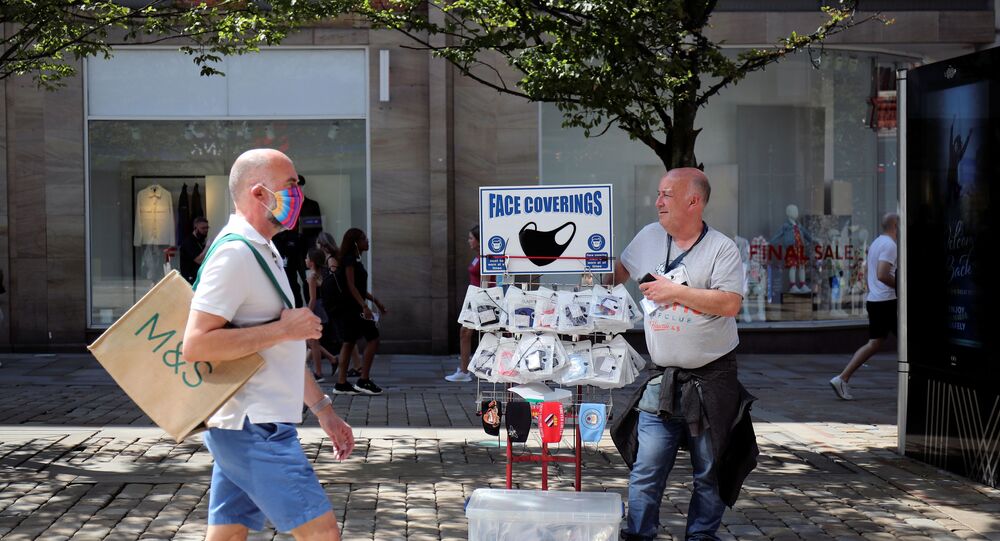 The news comes after figures revealed that out of the 20 of the worst affected areas across England, seven were in English northwestern region, UK media reported.

A 'major incident' has been announced by Greater Manchester authorities after reporting a spike in coronavirus infections.

Greater Manchester Police (GMP) said they would help agencies respond "as effectively as possible" and allocate further resources, with Manchester City Council adding that people "should not be alarmed" as it was "standard practice".

The statements echo similar comments from Manchester City Council leader, Sir Richard Lees, who told residents not to worry after the region prepared to impose the restrictions to combat fresh outbreaks.

“People should not be alarmed that a major incident has been declared," he said, adding that the measures were "standard practice for complex situations" which would allow a "central command structure" for agencies to "draw on extra resources".

Despite council and partner organisations working to tackle the pandemic since the start of the year, declaring the rise in cases a 'major incident' meant that authorities could "ramp this up further", he added.

"Following last week's government announcement of preventative public health measures across Greater Manchester to address the rising number of Covid-19 cases, the public would expect us to give this situation our concerted collective attention. That, with a view to enabling these restrictions to be lifted as soon as possible, is exactly what we are doing," he said.

Senior figures in Manchester hope to avoid a full-scale lockdown imposed by Health secretary Matt Hancock as seen in Leicester amid loosens restrictions across the nation.

“If the situation worsens, then clearly other measures will have to be urgently considered,” a senior figure said as quoted by the Manchester Evening News.

What is a Major Incident?

Major incidences are declared when police and councils to work jointly to resolve matters involving serious consequences, according to the Joint Emergency Services Interoperability Principles (JESIP).

Events such as natural disasters and terrorist attacks would allow the region to call on further resources when necessary.

Similar major incidences were declared in Manchester at the 2017 stadium bombings, which killed 23 people and injured over 800 others.

Further such measures took place in Bournemouth, Christchurch and Poole following a flood of residents and tourists to beaches amid the summer heatwaves.

Bournemouth councillors were "absolutely appalled" over the incident, Council leader Vikki Slade said at the time.

"The irresponsible behaviour and actions of so many people is just shocking and our services are stretched to the absolute hilt trying to keep everyone safe. We have had no choice now but to declare a major incident and initiate an emergency response," she added.

What Does This Mean for Manchester?

Greater Manchester was named one of the flashpoint spots by UK prime minister Boris Johnson for coronavirus resurgences in the UK along with East Lancashire and North and West Yorkshire in a press conference last Friday.

The restrictions were announced last week and were addressed in a speech by the Prime Minister, who told the public that new restrictions in the North England regions would ban mixing separate households from each other's homes as well as more than two different households as pubs, restaurants and other select venues.

"This move was simply to enable public agencies to access any additional resources they need as quickly and efficiently as possible. This is no more than a boost to our capabilities... and maximise our resources in the drive to reverse the spike in infection which we have witnessed in the last seven to 10 days," a Greater Manchester Combined Authority (GMCA) spokesperson said.

According to the new measures, households can only mix with people in the same household as per the government's "support bubble" policy, including those living alone, single parents with children aged 18 and under.

Groups of up to six people across two households can meet in public, but not in private gardens. Social distancing from guests outside of a household and not included in a support bubble must be enforced.

© REUTERS / HANNAH MCKAY
UK Prime Minister Boris Johnson Says Plan to Reopen Depends on Transmission Rate
Greater Manchester residents cannot visit loved ones in care homes outside of specific circumstances. People in the region cannot go on holiday with others outside of their support bubble.

Workers such as engineers can visit homes as part of their work, according to the new rules.

The news comes after the press statement from the Prime Minister, which saw tighter measures on the Northern regions, with Johnson stating that government ministers had "consistently" warned it would need to do so if the virus resurfaced.