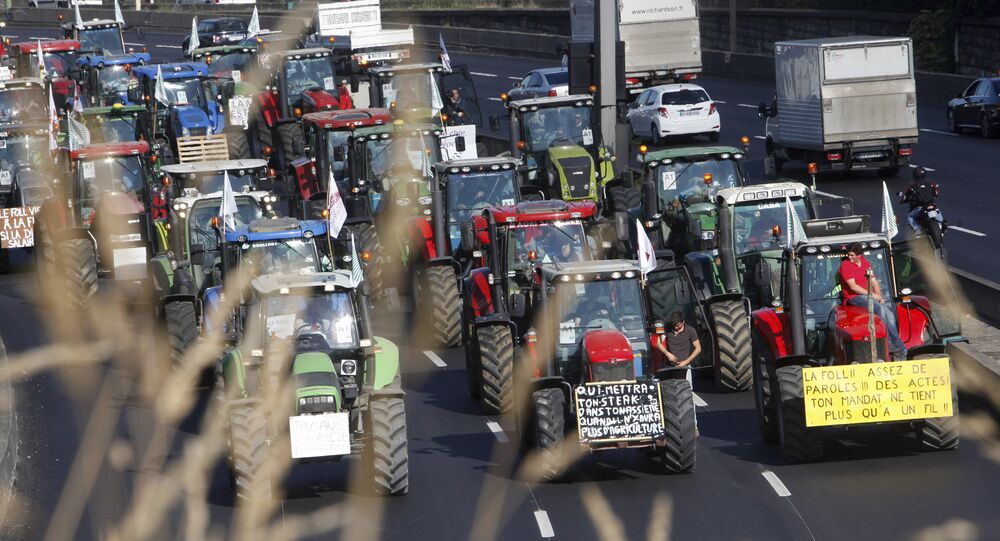 As the United Kingdom negotiates its exit from the European Union single market and customs union, concerns over a potential trade deal with the United States impacting domestic food standards begin to rise.

Demonstrators from Save British Farming (SBF), farmers, and their supporters took to Westminster, London on Wednesday to show their opposition to any future reduction of food standards in any potential trade deals.

Around 20 tractors slowly drove through the streets around Parliament in a loud demonstration just before the Agriculture Bill’s return to the House of Lords on Thursday.

Our tractors are crossing Westminster Bridge!

Heading down Embankment and up Whitehall next Congress before ending at Parliament Square! 🚜🚜🚜#SaveBritishFarming #agriculture #agriculturalbill pic.twitter.com/wHYZzUOsmf

​Other activists dressed up in fruit and vegetables to bring attention to concerns over food standards being put at risk of being lowered as the UK government pursues a trade agreement with the United States.

The demonstrators raised concerns about the potential importation of chlorinated chicken and antibiotic-filled meat, which are currently banned under EU standards, into the UK under a US trade agreement.

SBF says this is their inaugural event and ate planning a summer of activities to highlight “how together we can save Britain from chlorinated chicken and hormone-fuelled beef”.

“We believe that this is currently the best route to make our voice heard among MPs and decision-makers in the current situation, where large gatherings of people are discouraged.”

Environment Secretary George Eustice and International Trade Secretary Liz Truss have said that the Government is “firmly committed to upholding our high environmental, food safety and animal welfare standards outside the EU”.

Despite the promises, however, legal protections for food standards are not included Agriculture Bill or the Trade Bill.

US produce can also use types and amounts of pesticides that are banned or heavily restricted in the UK. The US Centers for Disease Control and Prevention estimates 1 in 6 Americans get food poisoning every year.

By comparison, The UK figure is around 1 in 28, according to the 2018 Food Standards Agency’s latest estimates.

After formally leaving the European Union in January, the UK is geared to leave the blocs single market and customs union on 31 December. This will mean the UK will have to form trade deals independently of the EU.