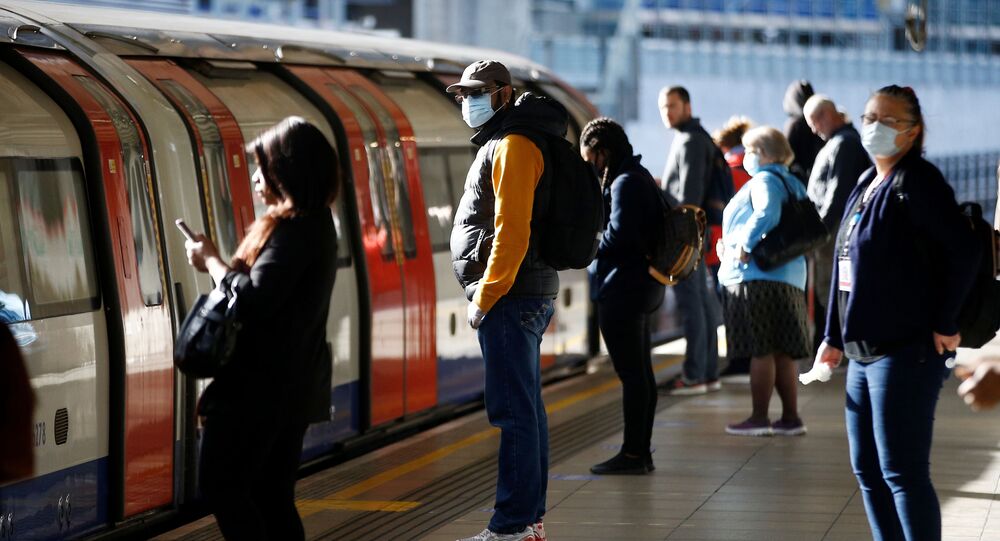 The news comes as Brits have remained under strict government measures launched on 23 March aimed at tackling the pandemic, which the Prime Minister said were "never seen before in peace or war".

The British government published changes to nationwide lockdown measures on Monday in a 60-page document, entitled Our Plan to Rebuild, which was released a day after UK prime minister Boris Johnson held a COVID-19 speech on Sunday.

The eased restrictions will take effect on Wednesday (13 May) and will include a restart of outdoor sports, unlimited exercise activities and meeting people from other households, in addition to continued social distancing protocols.

Lockdown restrictions will be fully relaxed after meeting five tests, including reducing the death rate and helping the National Health Service (NHS) cope with the pandemic. Sputnik takes a look at some of the top measures.

English residents can now sunbathe and have picnics while abiding by social distancing rules, keeping two metres apart from people not living in the same household.

But the rules do not apply in Wales, with Welsh first Minister Mark Drakeford stating that regulations did "not permit people to get in their cars" to drive to Welsh destinations, including those from England.

England can engage in sports with members of the same household or one person from another, but must respect social distancing measures and remain two metres apart. Swimming in public pools is still banned until further notice.

​Golf would also be allowed under the new restrictions but must follow coronavirus lockdown guidelines, according to Berkhamsted Golf.

Northern Ireland has not revealed whether it will follow the rest of the UK.

The hospitality industry falls under the plan's third step set to launch around 4 July, but only if the country can reduce its number of new infections.

But crowded venues such as nightclubs and concert halls may not reopen fully by the July milestone, the document read.

Remaining businesses such as beauty salons, pubs, hotels, churches and cinemas would open at the time while observing COVID-19 guidelines.

“And if we can’t do it by those dates, and if the alert level won’t allow it, we will simply wait and go on until we have got it right,” the Prime Minister said in his speech.

But face coverings should not be "used by children under the age of 2 or others finding it difficult to manage them correctly", such as unassisted primary school aged children or "those with respiratory conditions", the document said.

The document said: “As more people return to work, there will be more movement outside people’s immediate household. This increased mobility means the government is now advising that people should aim to wear a face covering in enclosed spaces where social distancing is not always possible and they come into contact with others that they do not normally meet, for example on public transport or in some shops.”

According to the guidelines, people would be allowed to meet one person from other households outside and while observing social distancing.

Should new cases lower further, the government would review whether households could merge groups to reduce the social impact on single households.

PM Johnson said in his speech that primary school students may be able to return to school by 1 June "at the earliest" but such efforts would depend on monitoring new coronavirus cases.

But the news contrasts Wales, with First Minister Drakeford stating that Welsh schools would not open in June.

“We think that the announcement by the Government that schools may reopen from June 1 with reception and years 1 and 6 is nothing short of reckless. Coronavirus continues to ravage communities in the UK and the rate of Covid-19 infection is still far too great for the wider opening of our schools," she said in a statement.

School closures were the "single most effective" way to stop the spread of the virus, Dr Bousted said, citing a University of East Anglia study.

Non-essential retail could reopen "when and where it is safe to do so", with retailers subject to the new guidelines and a further time frame over the next few phases, according to the document.

Wales stated that garden centres would reopen with social distancing rules, with further plans to reopen libraries and recycling centres.

The news comes after a British Retail Consortium report found on Wednesday that sales had plunged 19.1 percent in April, or the worst recorded drop in sales since the organisation began monitoring the industry in January 1995.

Those unable to work from home will be encouraged to return to work on Wednesday, with the government urging residents to avoid taking public transport due to limitations in social distancing.

Motorists can drive to work under the new guidelines, but workers are also being urged to travel to work by bike and working from home as much as possible.

News of the ease in restrictions come after the UK reported on Wednesday nearly 228,000 cases and with over 32,000 deaths, the highest fatality rate in Europe, according to figures from the John Hopkins University of Medicine.